We did it two years ago, and we’re back again. We’ve been scouting the globe to find you the best MMA prospects out there, country by country. This week, we take a look at five top prospects from Poland.

Our original Scouting the Globe series singled out the following five Polish talents:

He was on the list two years ago, and he’s back. Mateusz Rebecki is the current Fight Exclusive Night (FEN) lightweight champion with seven title defenses.

Crazy enough, Rebecki has to go through the Contender Series to get to the UFC possibly. Rebecki is a BJJ black belt and is a two-time gold medalist in ADCC (Poland). He’s been UFC-ready for the last five years. Rebecki was a bit one-dimensional at a time being solely a grappler. Now he’s slowly developed a striking game, mainly with a lot of power. He’s just so dangerous on the mat and that’s on top or bottom.

Rebecki was scheduled for a fight on the Contender Series on August 9, though that appears to have been postponed, and is now rumored for August 30. 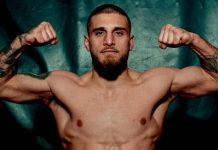 Scouting the Globe 2022: The Five Best Prospects From The United States