UFC legend Cub Swanson, now a Hall of Fame member, will return to the octagon this October.

Swanson (28-12) is set to face Jonathan Martinez (16-4) at the UFC’s October 15, 2022 Fight Night event. Swanson and Martinez each confirmed the booking on social media following an initial report by MMA Ideas.

Just weeks ago, Swanson was inducted into the UFC Hall of Fame’s Fight Wing, for his 2016 classic against Doo-Ho Choi. Both fighters remain members of the UFC’s active roster.

Swanson last competed in December, picking up a win against fellow veteran Darren “The Damage” Elkins. That fight saw Swanson finish Elkins in a sequence set up by a spinning wheel kick.

Martinez for his part has won three straight, most recently getting the better of Vince Morales in May. All three three fights on his current win streak have gone the distance; all three have been unanimous decisions favoring Martinez.

The 28-year old, who competed at flyweight outside the UFC, has fought mainly at bantamweight inside the octagon, with a couple of featherweight fights dotting his resume. However, it will be Swanson meeting him at 135 pounds this October.

The Hall of Famer confirmed that news on social media on Thursday.

“After 15 years in the Featherweight division I’ve decided to take my talents to 135 lbs,” Swanson wrote. “Why??? I simply needed a new challenge in my life. October 15th I’ll be facing Jonathan Martinez in my Bantamweight debut.”

The UFC’s October 15 Fight Night event does not yet have a venue, location or broadcast plan announced. The following fights have been reported for the card: 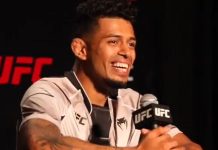