Come Saturday’s UFC London card at the O2 Arena in London, England, Jai Herbert was very much looking at a second chance to make a big impression.

“The Black Country Banger” had been knocked out by Ilia Topuria in March at the very same venue but was hoping for a better result against Canadian Kyle Nelson. For his part, Nelson was making his debut in the UFC’s lightweight division, after starting his run in the promotion at featherweight.

Both fighters took the center of the octagon after a touch of gloves. A body kick from Nelson started the fight and was answered from a high kick from Herbert.  A right hand from Herbert missed. A low kick from Nelson. Nelson caught Herbert’s kick and tried for a takedown, but Herbert defended. Nelson put Herbert against the fence, still trying for a takedown. About two minutes left, and Herbert reversed Nelson. Nelson cracked Herbert with an elbow against the fence. Just over a minute to go, and Herbert ate another quick elbow. The lightweights then got back to the center of the octagon. Herbert ate a couple of kicks to end the first round.

The third round started with both fighters landing calf kicks. Nelson shot for a takedown, but Herbert defended and actually ended up taking Nelson down. Not much action from Herbert while he was on top of Nelson. 1:15 left, and Nelson got to his butt to try and get up. Less than a minute, Nelson got back to his feet. Nelson tried to take Herbert down, but nothing came of it. The fight ended with a shot after the bell from Nelson that Herbert did not like.

Going to the scorecards, it was Herbert with his hand raised, with the third round the deciding factor. 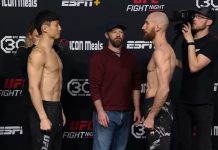 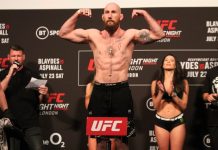