It’s Juliana Miller from Team Pena and Kaytlin Neil from Team Nunes in the last semifinal fight of The Ultimate Fighter 30.

This week, the fighters call home and get to break the news that they’re in the semifinal round. They also get a night out on the town in Las Vegas, with Pena’s team seeing a show, and Nunes taking her crew to a Brazilian grill.

After weigh-ins, we get a little flashback to Julianna Pena willing The Ultimate Fighter 18 — the first time women had competed on TUF. Then, it’s on to the fight.

“This fight is life or death. This is that serious for me,” Miller says ahead of her semifinal fight. “I will literally walk through the depths of hell to get this win.” Life or Death happens to be the title of the episode, but the superbly quotable “Juju” gets off an even better line later in the show.

Neil talks about the roller coaster she’s experienced, and the self-doubt she’s felt at times.

Miller gets her hands going early, and bullies Neil to the fence. Neil works from the outside, looking to counter and firing a high kick. They trade knees in the clinch, and Miller looks to get the fight down, but it’s Neil coming out on top. They’re back up in a flash, Miller pressing, firing her jab. Neil finds a home for her counters; Miller ties things up by the fence, takes the back and drags Neil down. She has hooks in, but gives up the position, only to retake the back after Neil almost escapes. This time, Miller locks in a body triangle.

While on the back, Miller lands a few punches to the head and heel kicks to the thigh. Neil turns in and scrambles out, but Miller gets her back on the mat and lands in mount. Miller hunts for an arm, ending up on bottom, but lands elbows and punches off her back. Kaytlin gets in a few from the top, but it was Miller’s round.

Round two opens with Miller working her jab, firing a combo and forcing Neil to retreat. By the midway point of the round, Miller uses a trip to get things down. She passes to mount. and Neil winds up hit with elbows and shoulder strikes. She scrambles, but Miller catches an arm, locking on a kimura, and this time, she doesn’t let go until the tap comes!

“I do this for the broken, the beaten, the damned. People who don’t think they can make it another day, or are too scared to try,” Miller exclaimed after the win.

Your finalists: Mohammed Usman vs. Zac Pagua at heavyweight, and Juliana Miller vs. Brogan Walker at women’s flyweight. While coaches Julianna Pena and Amanda Nunes will run it back at UFC 277 on July 30, the TUF 30 finals will go down at UFC Vegas 59 one week later.

Looking back at the season as a whole— not bad at all. Practically zero bad behavior, low on the antics, high on the fights, and potentially a couple of solid additions to the UFC could come out of it. Now it’s on to the finals! 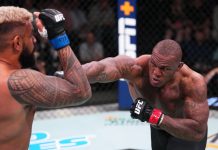