Bellator MMA will return to Milan, Italy on October 29, 2022, the promotion announced Wednesday.

The show will mark the first event for Bellator in Milan since a three-card stint in September and October of 2020, and the first fan-attended show there for the promotion since October of 2019.

Bellator officials revealed the news in a press release on Wednesday. Bellator Milan comes on the heels of other successful European ventures for the company this year, including stops in Dublin, London, and Paris. A second Dublin show is scheduled for September 23.

Tickets for the Milan event go on sale Wednesday, July 20, via Bellator.com and the promotion’s Italian-language website, Bellator.it.

The 2019 event marked Bellator’s first trip to Milan. However, the outfit has made stops in Italy as far back as 2016, debuting in the country in Torino that year. Stops in Florence, Genoa, and Rome followed. Overall, Bellator has visited the European nation 10 times in the past six years.

No fights have been announced for the October card. The promotion’s biggest Italian star, Alessio Sakara, has not fought since the 2019 event, where he secured a first-round TKO of Canaan Grigsby.

Next up for the promotion is Bellator 283, which takes place this Friday, July 22, 2022 at the Emerald Queen Casino and Hotel in Tacoma, Washington. 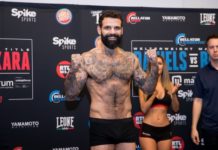