UFC featherweight Giga Chikadze appears ready to make his return, after suffering his first loss in the promotion earlier this year.

Georgia’s Chikadze (14-3) was on the wrong end of a unanimous decision against Calvin Kattar back in January. The fight was a banger, one that extended Chikadze’s post-fight bonus streak to four after being awarded Fight of the Night.

Since then, the featherweight has been linked to a fight with The Korean Zombie. However, Chikadze told Cageside Press recently that he wasn’t sure where things with Zombie stood.

“I dunno, man. Zombie, not only Zombie, tomorrow whoever loses [between Alexander Volkanovski and Max Holloway], I feel like is the right fight,” Chikadze said at Friday’s UFC X. “I feel like Brian [Ortega] and Yair [Rodriguez] are fighting, if anybody pulls out— I don’t know.”

“There are so many interesting match-ups,” Cikadze continued. “I would love to jump in and take some good opportunity for the fans. Whatever fans want to see, even a Kattar rematch one day. We took shots in the octagon, and we took the shots at [the] after party. We can get the same thing, and see how it turns out next time.”

In the meantime, Chikadze is in the gym, and enjoying the clips fans and fellow martial artists send him of their attempt at the Giga Kick.

“I’m getting every single hour, at least like two,” he said of the fan-made clips. And he definitely enjoys them. “Of course! I’m seeing like knockouts at the gym, at the events, at kickboxing matches, MMA matches. I cannot say, express my feelings when I see somebody dropping with it. But you know, that is a liver kick, but there is also the way how I do it. When I see the same exact movement, when they’re trying to imitate the same thing, that makes me happy.” 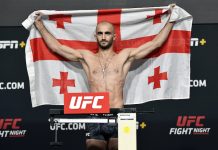