After his fight with Joe Lauzon fell through for the second time this past weekend, Cowboy Cerrone already has a new date set.

Cageside Press confirmed the booking Thursday, following an initial report by ESPN. Miller had originally been booked against Bobby Green, but was knocked out of the event due to undisclosed reasons.

Taking short-notice fights is nothing new for Cowboy, who will be entering fight #48 under the UFC/WEC banner. Cerrone has gone on record to say his goal is to hit 50 fights between the two promotions, then call it a career.

The occasion will also see him look to make weight for the third time in a little over two months, starting with his April 30 match-up against Lauzon, which was waved off the day of the fight. A June 18 date with Lauzon also fell through the day off; Cerrone was stricken with food poisoning in April, while Lauzon’s knee locked up last Saturday.

Miller and Cerrone first met in 2014, in a fight that saw Cowboy secure a KO finish care of a head kick. That captured Cerrone his fourth straight post-fight bonus; the win came as part of an eight-fight win streak that led him to a shot against Rafael dos Anjos for the UFC’s lightweight title.

Things have been less rosy for Cerrone of late. The fan-favorite has not won a fight since 2019, and is 0-5 with a no contest since that time. The no contest, originally a draw against Niko Price, came after Price tested positive for marijuana following the fight.

Miller has won his last two fights, getting the job done with his hands against both Erick Gonzalez and Nikolas Motta. That’s a new twist for the old dog, who will be entering UFC fight #40.

UFC 276 takes place on July 2, 2022 at the T-Mobile Arena in Las Vegas, Nevada. The line-up currently breaks down as follows: 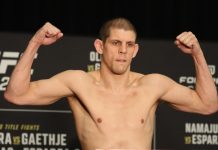 Joe Lauzon Out of UFC Austin, Fight with Cowboy Cerrone Off Again 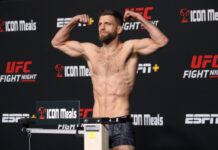