Atlanta, GA — PFL President Ray Sefo had Clay Collard winning the main event Friday at PFL 4 in Atlanta, though the judges saw things the other way.

Collard was up against Alex Martinez, and the split decision loss knocked him out of the post season.

“I thought Clay did enough in the first two rounds to win that fight. The second round could have gone either way I think,” Sefo told Cageside Press following the event at the Overtime Elite Arena. “In my opinion, Clay was winning that round, dropped him with a minute and a half, but then Alex was able to reverse him when they were on the ground. And then honestly, I thought they were done. I don’t know how Clay survived that, because that choke looked deep, and so I thought it was done. But Clay ended up weathering the storm and fought through it.”

“The fight was that close, it could have gone either way. But I thought Clay did enough to win the fight; that being said, it was a close fight anyway.”

One noticeable absence at PFL 4 was Cory Hendricks, who stepped up earlier in the season and secured five points with a win over former light heavyweight champ Emiliano Sordi. Despite being in contention for the post-season, he didn’t even get a fight on Friday.

That, Sefo said, was because things with Viktor Pesta came down to the wire. The promotion initially thought Pesta was out, until a phone call from the commission advised that if the former UFC heavyweight got his paperwork in, he’d be cleared to fight.

As a tournament alternate, that left Hendricks as the odd man out.

“That’s the tough part about being an alternate for the season, is that he was able to come in here, win a fight, and then he was off again because Pesta was cleared. And it could have been anybody in the light heavyweight division, but it’s unfortunate that he’s in that spot,” explained Sefo. “But that’s the spot, he knew from day one that he was the alternate for the season, and whatever happens, happens.”

“That’s the luck of the draw I guess,” Sefo later added.

Watch the full PFL 4 post-fight press scrum with Ray Sefo above. More coverage can be found below. 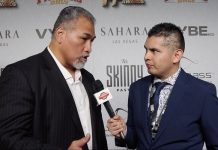