UFC Vegas 56 ended in considerable controversy. Alexander Volkov finished Jairzinho Rozenstruik in the first round of their main event, but many watching thought referee Herb Dean stopped the fight prematurely. Today we will be looking at what is next for the winners of UFC Vegas 56.

Alexander Volkov has been a bit wishy-washy since his knockout loss to Derrick Lewis in 2018. Since that fight, his UFC record is 5-3 losing to Curtis Blaydes, Ciryl Gane, and Tom Aspinall. Volkov looked impressive in this fight with Rozenstruik and it truly is a shame the fight ended the way it did. With that being said, Volkov was ranked seventh in the UFC’s heavyweight division before his win.

If he chooses not to give Rozenstruik an immediate rematch, Volkov should be looking to move up higher in the heavyweight rankings. Derrick Lewis is 1-2 in his last three fights and will be fighting Sergei Pavlovich on July 30th. A rematch with Lewis would make sense if Lewis wins and if Pavlovich wins it would put him on a four-fight win streak. Either way, the winner of that fight would be a perfect opponent for Volkov in his next fight.

Volkov’s next fight: Winner of Lewis vs. Pavlovich

Movsar Evloev dominated Dan Ige in the co-main event of UFC Vegas 56. That win extends Evloev’s record to 16-0 overall and 6-0 in the UFC. He has great grappling and will be a problem for anyone in the featherweight division. His win over Ige will likely land him inside the top ten of the division and there are plenty of options for him in his next fight.

Bryce Mitchell is also undefeated and has had an impressive run in the UFC’s featherweight division. Mitchell is ranked ninth in the division and has a lot of hype surrounding him after beating Edson Barboza in his last fight. He is a major jiu-jitsu player but has yet to go up against a dominant wrestler in the UFC. Evloev might be Mitchell’s first chance to test his wrestling skills.

Lucas Almeida finished Michael Trizano in the third round in his UFC debut this past weekend. In his next fight, Almeida should be fighting another up and coming rising featherweight to further climb the featherweight rankings. Pat Sabatini is 4-0 in the UFC and seriously impressed the UFC brass with his decision victory over TJ Laramie in April. Sabatini is a good grappler but has some holes in his striking. Fighting each other would be a great chase for Almeida to showcase his grappling and for Sabatini to showcase his striking.

Promotional newcomer Karine Silva picked up a big win in her debut at UFC Vegas 56, submitting Poliana Botelho. She also pocketed a $50,000 Performance of the Night bonus for her d’arce choke submission.

Silva will be one to watch moving forward and might even get fast-tracked a little. With that in mind, former KSW champ Ariane Lipski had to pull out of a fight back in March. She’s coming off a win, and if she’s due back later this year, that could be an interesting match-up.

Ode Osbourne had a short night on Saturday as he finished Zarrukh Adashev early in the first round. This makes Osbourne 3-2 in the UFC with his only two losses being against Manel Kape and Brian Kelleher in his UFC debut. Osbourne has shown that he has great striking and can take a punch. In his next fight, he should look to take a step up in competition.

David Dvorak is 3-1 in the UFC but he lost his last fight by decision to Matheus Nicolau in March. Dvorak is very well-rounded with eight of his wins being submissions and eight being by knockout. He has only been finished once in his professional career and that was because of a cut early in his career. Dvorak would be the perfect test for Osbourne to see if he is ready to fight someone in the top 15 again.

Light heavyweight Alonzo Menifield put to rest the trash talking and dubious record of Askar Mozharov at UFC Vegas 56. The be fair, Mozharov’s incredibly shrinking record, which dropped from 25-7 to 19-12 in the days leading up to the fight, probably did more good than harm in turns of viewership — fans tuned in to watch the fighter with the padded record get wrecked. And that’s exactly what happened.

Menifield however won’t get much credit for beating a guy who probably shouldn’t have been there in the first place, not that it’s any fault of his own. So he’ll probably get a fighter coming off a win, but well out of the rankings. Philipe Lins fits the bill. He’s a former heavyweight and PFL champ who just picked up his first UFC win after moving to 205 pounds. 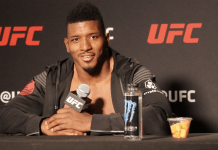