Joe Solecki and Alex da Silva faced off on the preliminary card at UFC Vegas 56 on Saturday, in a fight that found the two young lightweights both looking to rebound from recent losses.

Solecki had dropped a split decision to Jared Gordon back in October, while da Silva had fallen to Brad Riddell in September of 2020 — and had not competed since.

It didn’t take long for Alex da Silva to strike one Saturday. Within 30 seconds, he had dropped Solecki care of a left hook, then moved in and got on top. With the fighters dry, the Brazilian had plenty of time to work. That nearly backfired, as later in the round, Solecki would catch da Silva’s neck, squeezing hard on a guillotine. da Silva eventually pulled out, and went back to work on top.

In round two, Joe Solecki went right after a takedown, and when he got da Silva to the ground, he quickly took the back. With both hooks in, Solecki worked to slip his right arm under the neck. da Silva fought hands, and latched on a body triangle. Solecki spent plenty of time working on the rear-naked choke, softening da Silva up with punches. The Brazilian was warned for sticking his toes in the fence, and could be seen grabbing Solecki’s gloves, a foul that went unnoticed by the ref. Both offences prevented Solecki from taking the fight where he wanted it — and the ref then announced he was taking a point, without halting the action as Solecki was in the driver’s seat.

Thanks to the point deduction, da Silva entered round three with his corner urging him to find a finish. And for the first two minutes, they fought at range, affording da Silva the opportunity to look for a knockout. He couldn’t find it, however, and Solecki then landed a takedown. That ate up some block, but when they got back up, da Silva still had time to work. And the next time they went down, it was da Silva on top, working from inside Solecki’s guard. He landed a couple smashing elbows from the top, then backed up, waved Solecki to his feet, but kicked his leg anyway.

They would face off on the feet in the final minute, with da Silva landed a solid right hand. He mixed in a leg kick, and both men landed several heavy blows. Alex da Silva would raise his hands at the horn, but that wouldn’t sway the judges. Instead, Solecki took the majority decision win. 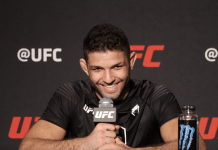