The third episode of The Ultimate Fighter 30, “Boiling Point,” kicked off with Team Pena’s Chantel Coates having a heart-to-heart with heavyweight Mohammed Usman. Ahead of the show, Coates had to deal with COVID-19, the flu, and a miscarriage.

That, just weeks out from filming.

Coates opening up gets Usman talking, as he shares his own tragic story: his son, Nash, drowned in 2019. The loss of his baby boy drove Usman to take up fighting.

“I started fighting because of my son Nash. We had him in 2016, he passed away in 2019 from drowning. He’s the main reason that I fight,” Usman tells the camera. Fighting also runs in the family: brother Kamaru, who appeared on The Ultimate Fighter 21, is the UFC’s welterweight champion.

Usman says he’s dedicating his time on TUF 30 to his son. “All the other heavyweights better strap in, because I’m coming.”

In Usman’s way stands Mitchell Sipe. Having come up short on Dana White’s Contender Series previously, Sipe is looking for some redemption. He’s also looking to get at Usman, who he believes ducked him on the regional scene.

Sipe’s upbringing was difficult, we learn; his mother ran with a bad crowd, and his father was eventually awarded full custody, making him into the man he is today.

Much of the talk ahead of his one had been about Mohammed Usman stepping out on his own, fighting as himself, rather than as “Kamaru’s brother.” Ignoring the fact that Usman was already starting to make a name for himself as a top-flight prospect. Inside the TUF house, the two fighters do plenty of jawing, which carries over to the weigh-ins. Forrest Griffin, again in the Dana White role, gets to keep the pair in line.

Neither come off looking particularly great, but it’s clear Usman getting the “push” in the episode.

Plenty of big swings came early in Usman vs. Sipe, which really shouldn’t surprise anyone. Usman begins working his jab after a bit of showboating by Sipe, and it’s clear he’s the more technical striker. Sipe at times has his hands down, and is practically leaning forward, other times, he flashes stance switches and bounces on his feet. Sipe then drops Usman with about two minutes left in the opening round! He jumps on top dropping hammer fists, drawing a warning for hitting the back of the head. Usman escapes regardless, and later puts Sipe down, who might have been a bit off-balance— but Mohammed Usman can’t keep him there.

Sipe gets his own jab working in the second round, and flashes a front kick. Usman, closing the distance, connects with an uppercut about two minutes in. Sipe taps his chin, egging Usman on. He also goes to the body with a kick. Usman takes a big swing and misses. Sipe fires a leg kick, then taps his chest and throws his arms up in the air. A curious tactic in a fight that was relatively close, given judges don’t score points for such antics. Usman lands a right hand in the final minute, connects with his jab, and targets the body.

After the second round, Sipe calls out “I’m just getting started.” Maybe, maybe not, but they did head to a third round.

Sipe’s eye is a mess heading into the third round. The mouse under it is basically a full sized rat. Sipe opens the action with a couple of low kicks then goes upstairs twice. The fifth consecutive kick by Sipe heads to the midsection. It seems Sipe really wants to keep Usman at range. Usman backs him up; he’s not throwing much, but he’s dictating where the fight plays out. Given they’ve split the first two rounds, that could be huge. Sipe windmills, but doesn’t throw a punch at the end of it. Usman turns up the heat a bit, and Sipe is forced to escape. Usman hits that damaged eye with a jab. Ouch. Usman closes the distance again and lets rip with a combo. The man puts everything behind his punches, that’s for sure. The pair trade a bit in the final minute; Usman raises his hands in celebration. A moment later, Sipe does as well, but his heart isn’t in it.

Usman is still screaming “let’s go” after the fight, leading Sipe to have a few more things to say. An extremely emotional Mohammed Usman then breaks down backstage. Sipe’s team, meanwhile, says he was the better fighter, but coach Amanda Nunes tells him that he played with his food too much.

Next week’s fight is chosen by Nunes, who picks Chantel Coates vs. Brogan Walker. Walker says she has ten different ways to beat Coates. We’ll know if that’s true next week. 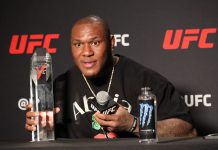