It wasn’t too long ago when Yorgan De Castro was a +500 underdog going into his Dana White’s Contender Series fight, or when he was matched up against Justin Tafa in his opponent’s hometown. The 34-year-old heavyweight thrives off being an underdog and says it is a big mistake to overlook him.

De Castro headlines Eagle FC 47 against former UFC heavyweight champion Junior Dos Santos in a number one contender’s fight for the Eagle FC heavyweight title. “The Mad Titan” is honored to face a legend of the sport and thinks the pressure is all on his opponent— because De Castro himself is expected to lose.

“The guy is a complete mixed martial artist, and I can say whatever I want right now, act tough and say I’m going to do this and that. It’s just going to make me look silly because the guy has faced everybody in the heavyweight division. He has faced everybody. He faced a short guy like me with a power, a black guy; he has faced everyone that looks like me already,” De Castro told Cageside Press in an exclusive interview recently. “I can’t say anything. The guy has been there, done that. So to me, I think even though the pressure is on him, I have to go there and do the work and fight and show that I can do this.”

“On paper, he is supposed to wipe the floor with me. He has got twice the experience than me. He’s been there, he had 12 years in UFC. He was a champion and defended his title. If you put us on paper, we should not be together in the same room. But guess what? We’re heavyweights. I got a lot of power and confidence in my power. I have a chance against anyone, and if you count me out, it is a big mistake and especially when I’m the underdog. When I feel like people underestimate me, it is a different type of fire under me.”

De Castro feels the same way he felt against Alton Meeks and Justin Tafa back in 2019. Everyone counted him out, and he proved everyone wrong by finishing them both.

Another huge factor De Castro feels he has in his favor is that he isn’t afraid to get knocked out anymore. He was knocked unconscious by Jarjis Danho on ABC in his last fight with the UFC. He thinks that was the best thing that could have happened to him, because now his mindset is to kill or be killed.

“That was the best thing that happened in my life. Honestly, one of my biggest fears before that fight was getting knocked out on TV and my family seeing it and everybody else seeing it. I was always pulling back. I feel like my two [decision] losses; I didn’t engage much because I was like, ‘I don’t want to get knocked out.’ And I regret that about those losses, that I didn’t give it my all,” De Castro said. “Losses make me a better fighter and make me where I am right now. Guess what? You get knocked out, and you wake up 30 seconds later, and you don’t even remember. I don’t care. I’m ruthless now. I don’t care anymore, that’s what used to be my number one concern is getting knocked out. I’m a better fighter now.”

Yorgan De Castro is bringing that kill or be killed attitude with him on May 20. He believes he will be able to knock Dos Santos out, and if not, he will get finished trying to.

“I’m getting my hand raised by any means necessary. In a perfect world, I will leg kick him and touch his chin with my right hand. But that we’re talking about JDS, and he’s tough, he’s been in many battles so I don’t know how we’re gonna end, but I’m telling you I’m gonna bring it, and I’m willing to kill or be killed. This is gonna be fun,” De Castro said.

This is also De Castro’s second fight as a full-time fighter. He finally quit his full-time job before his last fight, and he ended up finishing his opponent in a minute. De Castro smiled when asked if that was a sign to come.

Watch the rest of our interview with Yorgan De Castro above. Eagle FC 47 goes down May 20 on the FLX app. 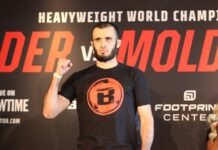 UFC’s Adesanya Floats Division Switch for Whittaker: “Go Up to 205, See What That’s...