Originally set to fight in April, UFC flyweights Tatsuro Taira and Carlos Candelario finally entered the octagon at UFC Vegas 54 on Saturday night. The original bout was scrapped due to Candelario coming down with an illness.

Taira (10-0) made his UFC debut as an undefeated prospect after spending time in Vale Tudo Japan and Shooto promotions.

Candelario (8-1) took a loss at Dana White’s Contender Series in Aug. 2021 but was awarded a contract by White after the UFC president said he felt Candelario had won the bout. It’s worth noting that Candelario took three tries to make weight on Friday morning, but ultimately came in at 126 pounds.

Candelario pressed forward right out of the gate and threw a head kick, but was blocked. Taira changed levels and shot on a leg. Candelario defended perfectly and got the separation. Candelario himself shot in on a single leg and Taira defended. A clean right cross from Taira landed which was the biggest blow of round one. Taira shot in again on a single leg to get the body lock tearing Candelario down. Candelario used the cage to get back to his feet not letting Taira on his back. With thirty seconds left Candelario got the single leg takedown and ended the round on top.

Both fighters traded head kicks to start round two, followed by a missed takedown from Candelario. Taira sat Candelario down with a right hand and jumped on the back. Taira worked actively for the finish staying busy with short elbows. At a point, he almost had the rear-naked choke, where it seemed like Candelario was about to tap before he slipped out. Candelario kept moving and fighting the wrists, eventually turning towards Taira. After being dominated throughout the round Candelario ended round two on top.

In the final round right away Candelario went for a takedown and got Taira down. Taira scrambled and Candelario dropped for a guillotine. It was super tight forcing Taira to slip go to his back. Taira got out and created another scramble that time getting on top. Taira attempted to jump full mount but Candelario flipped him over. Taira immediately threw the leg over and attempted a triangle that looked deep. Candelario rolled out and in another scramble Taira took the back. With a minute left Taira was in full mount and landed some elbows and punches smashing away to the final bell. 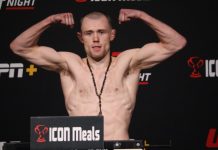 UFC: Jake Hadley vs. Carlos Candelario Lined Up for November 5