UFC flyweight Molly McCann will take on Hannah Goldy at UFC London on July 23rd at The O2 Arena.

The fight was announced Tuesday by UFC officials on social media.

McCann (12-4) is coming off a spectacular knockout victory over Luana Carolina at UFC London in March. McCann’s spinning back elbow finish of Carolina has made the highlight reels ever since.

As with all fighters who found a finish on the March 19 card, “Meatball” Molly was awarded a $50,000 Performance of the Night bonus for the stoppage. The Liverpool native recently appeared back stage at the Footprint Center during UFC 274, confirmed she would be fighting in London and hinting the announcement would come soon.

Goldy (6-2) won her last fight in Sept. 2021 where she defeated Emily Whitmire by submission when she won by armbar. She was expected to return to action this past February, only to be forced out of a fight with Jinh Yu Frey due to illness.

UFC London goes down on July 23 at The O2 Arena and the card currently looks as follows: 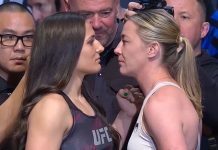 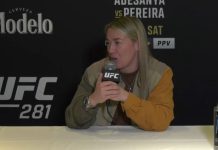