“Obviously I want to redeem myself against Ray Cooper, at some point in the season,” said MacDonald (23-8-1), speaking to reporters in person and online following the event at the ESports Stadium in Arlington, Texas. “That’s the fight I want.”

The pair’s first fight, last August, came as part of the welterweight semifinals. Cooper would win a unanimous decision that night, bouncing MacDonald from the playoffs and squashing his dreams of winning a championship in a second major promotion.

He had plenty of time off to dwell on the loss, and to a previous one to Gleison Tibau, which many deemed a robbery. But heading into the bout with Brett Cooper, despite the two-fight skid, MacDonald was in a good place. “I felt good in there mentally, like pre-fight, walking into the cage. I was ready to fight anybody. I was good to go.”

Canada’s “Red King,” a former UFC title challenger and Bellator MMA champion, knows that his career is being looked at differently these days. A lot of “what ifs” and “could have beens” surround the welterweight talent, who is still just 32-years old.

“I feel like I’ve taken some bad losses and I’ve made some bad decisions, and unfortunately, there’s a certain outlook on my career from the public’s eye,” MacDonald acknowledged, “but I feel inside that I’m still capable of being the best in the world. So I’m back on my horse, and I’m ready to go take that spot and accomplish my dreams.”

That said, over the years, there have been points where he lost interest in fighting, MacDonald admitted. “There’s a few times where I questioned myself and my time in this sport, but I didn’t quite feel like it was the time to give up. And I’m happy I didn’t, because I feel like I’m at the best I’ve ever been.” 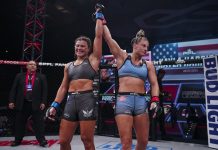