KSW 69 went down on Saturday, April 23, 2022 in Warsaw, Poland, with a bantamweight title fight in its main event.

That fight had undergone a late change-up, as champ Sebastian Przybysz was now defending his title against promotional newcomer Werlleson Martins. Originally, the plan had been for Przybysz to face off against Zuriko Jojua; that was scuttled when Jojua was forced out of the event due to a rib injury.

Przybysz first captured gold in March of 2021, defeating Antun Rakic to claim the 135lb title. He defended the belt against Bruno Santos last October, defeating the Brazilian in style with an inverted triangle choke.

Outside of the main event, middleweight action was set for the KSW 69 co-feature, with UFC veteran Pawel Pawlak taking on Cezary Kęsik. Pawlak was unbeaten since 2019, going 5-0-1 in that stretch.

KSW 69 streams live via KSWTV.com on April 23, 2022. Full results from the card, which gets underway at 1PM ET, can be found below. 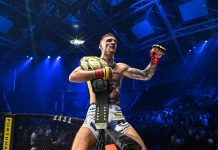