A top 15 middleweight match-up has been rebooked for UFC 276, part of International Fight Week.

Multiple sources, speaking on the condition of anonymity have confirmed to Cageside Press that Uriah Hall and Andre Muniz have been rebooked for UFC 276 on July 2. The pair of middleweights were supposed to fight last week at UFC Vegas 51, but Hall withdrew.
Muniz would confirm the booking on his Instagram.

Hall (17-10) had a four-fight win streak snapped in his last outing. In his third UFC main event, Hall was defeated by Sean Strickland via unanimous decision. Prior to his most recent loss, he defeated Chris Weidman at UFC 261, and then he finished his MMA idol, Anderson Silva, on Halloween in 2020.

Muniz (22-4) has been phenomenal since entering the UFC in 2019. He defeated Antônio Arroyo via a unanimous decision in his UFC debut, but now, he has finished his last three opponents by way of submission in the first round. Last year, he snapped Jacare Souza’s arm at UFC 262 and ended his year defeating Eryk Anders.

Muniz will be looking to take Hall’s No. 9 ranking.

So far, the UFC 276 fight card looks like this: 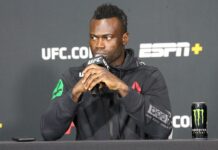 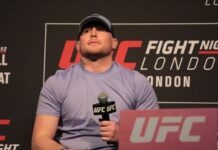 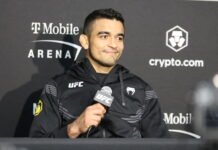