Arlington, TX – The move up to 205 seems to have done wonders for PFL light heavyweight Omari Akhmedov who finished Viktor Pesta via first round KO at PFL’s season opener on Wednesday night.

“I was expecting to get a knockout. Overall when I saw his fights before I figured he’s pretty slow. So I had a good chance to finish him the time is over,” Akhmedov told reporters in his post-fight scrum through a translator.

Akhmedov’s game plan to punish the lead leg of Pesta seemed to work just as his coaches predicted it would.

“The original plan was to beat up his front leg. So that’s when I saw him slow even more down. Then just finish up going from there,” Akhmedov said.

Akhmedov came into this fight after losing his debut bout in October 2021 against Jordan Young. Did he feel that this was his real PFL debut?

Having fought in many divisions in his career it seems as though the move to light heavyweight should have been something Akhmedov did sooner rather than later.

“No, no regrets. The problem is there is no 84 kilo category here, and if anything I’m underweight. A lot of guys are trying to burn weight and all that stuff. When I wake up I actually didn’t have to cut much. That was not an issue for me. So yeah it’s not something that I regret,” Akhmedov said.

For many Muslim fighters having to train and fight during Ramadan can be challenging. Some fighters refuse to take bouts during the season, but for Akhmedov it wasn’t a problem.

“Yes that’s a holy month for us and we usually try to keep it peaceful. As you might have noticed I did not really celebrate because it’s more humble month for us. But you know it just coincided the PFL. I had to do what I had to do, but I’m just trying not to celebrate too much and praise myself. Again it’s all about humility this month,” Akhmedov said.

“Stay humble and respect each other.”

Watch the rest of Omari Akhmedov post-fight scrum above. For more from PFL’s 2022 season opener check out CagesidePress.com 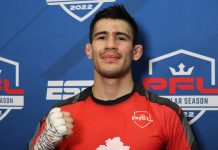