UFC Vegas 51 was a card that didn’t exactly light the combat sports world on fire. Too many fouls, too many unfortunate finishes, including two technical decisions resulting from illegal strikes, and three bouts with point deductions.

Then there was the extremely ill-timed shout-out of a wanted drug kingpin by victorious Mounir Lazzez to open the televised main card. Which happened to be airing on ESPN proper.

Overall, Saturday’s card is undoubtedly one that the promotion would like to move on from, quickly. There were some bright spots, however.

Fighting for the first time since 2020, Drakkar Klose finally got to throw down on Saturday night, against an opponent who didn’t opt to shove him during weigh-ins. Despite Brandon Jenkins being a much more amicable foe than Jeremy Stephens, Klose beat him like Jenkins owed him money. Perhaps picturing “Lil Heathen” instead the entire time.

The win, which came via TKO in the second round, earned Klose a $50,000 Performance of the Night bonus. Andre Fialho earned the other, for his first-round starching of Miguel Baeza. That violent TKO put an end to a very explosive fight, and was the only finish on the UFC Vegas 51 main card.

Fight of the Night went to the back-and-forth affair that was Mayra Bueno Silva vs. Wu Yanan. Her first fight as a bantamweight in the UFC was a memorable one for Silva, who earned a unanimous decision victory against China’s Yanan. 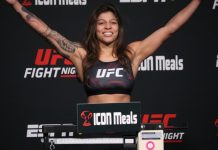 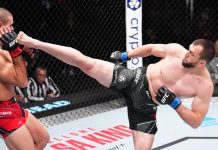