RIZIN Fighting Federation was kicking off back-to-back shows over the weekend with RIZIN TRIGGER 3rd, live in Tokyo, Japan.

Atop the RIZIN TRIGGER 3rd card was a familiar name, as Yusuke Yachi met Luiz Gustavo in a lightweight match-up. The fight was a rematch of the pair’s 2018 rematch, which Gustavo won care of a second-round knockout.

Yachi was also looking to shake off a loss to Roberto “Satoshi” Souza is his last fight, which saw him come up short in a bid for the RIZIN lightweight title. Gustavo was returning to RIZIN, and to fighting period, for the first time since 2019 meanwhile. Back in 2019, he’d been bounced from the lightweight grand prix by Patricky Pitbull.

In total, eight fights were set to unfold at the event, followed by RIZIN 35 at the same venue the following night.

RIZIN TRIGGER 3rd takes place live at the Musashino Forest Sport Plaza in Tokyo, Japan on April 16, 2022, with an English language live stream available via LIVE-NOW. Full results from the event can be found below. 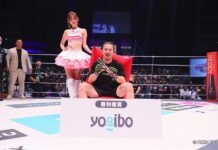