The UFC returns to Pay-Per-View with UFC 273 this Saturday in Jacksonville, Florida — the promotion’s third consecutive event outside the confines of the Apex in Las Vegas.

Topping the event is a pair of title fights, featuring featherweight and bantamweight gold on the line. Yet in terms of fan interest, perhaps no fight had the masses’ attention like Khamzat Chimaev vs. Gilbert Burns.

Chimaev has been the “next big thing” for over a year now, his seemingly inevitable ascension to the top of both the welterweight and middleweight divisions held back only by a nasty bout with COVID-19 that same him nearly retire from the sport. Now back under full power, Chimaev was paired up against former title challenger Burns, in a fight that had the potential to land “Borz” in a title fight with a dominant showing.

While the intrigue was with Chimaev-Burns, the grudge match came in Aljamain Sterling vs. Petr Yan, a rematch from the fight that saw “Aljo” become the first man in UFC history to win a title by disqualification. An illegal Yan knee saw to that; Sterling had not fought since, coping with a neck injury, while Yan had claimed an interim title with a win over Cory Sandhagen.

Lest you think it was all water under the bridge, Sterling had packed his “MMA Rule Book for Dummies” with him for his trip to Jacksonville.

And of course, topping the card was featherweight champ Volkanovski, looking to stave off an attack by the ever-popular Korean Zombie. Originally booked into a third fight with Max Holloway, an injury to “Blessed” opened the door for the Zombie invasion.

Weigh-ins for UFC 273 go down Friday morning in Jacksonville starting at 9AM ET — check below for results!

While the main card was set early in the weigh-in window on Friday, with no misses, preliminary card fighter Kay Hansen missed the mark by 2.5lbs for her strawweight fight with Piera Rodriguez. Then, in the dying minutes of the official weigh-in, Julio Arce, behind a barrier, missed the bantamweight limit by half a pound.

* Hansen misses weight by 2.5lbs for her strawweight fight with Piera Rodriguez. The fight will move forward at a catchweight, with Hansen fined 20% of her purse.

** Arce misses weight by 0.5lbs for his bantamweight fight with Daniel Santos. 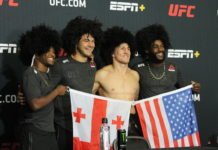 UFC: Champ Aljo Willing to Move Up Rather Than Fight Teammate Merab Dvalishvili