Jacksonville, FL – The UFC announced today that UFC middleweight Kelvin Gastelum has suffered an injury and will no longer face Dricus Du Plessis at UFC 273 on April 9th.

The UFC announced the withdrawal on their UFC.com on Friday.

Gastelum (17-8, 1NC) was originally set to face Nassourdine Imavov but Imavov was unable to secure a visa to travel to the US for the bout. Instead of rescheduling the fight for UFC 274 Gastelum instead requested a replacement and accepted the Du Plessis fight.

The bout has been cancelled and Du Plessis will also be pulled from the card. 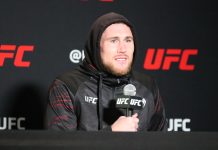