The UFC is taking the week off, as is Bellator MMA and ONE Championship, but Cage Warriors has two shows this week, leading the way in the prospect department.

A lot still needs to be answered from Susurkaev but he’s cruised so far in his career. His debut he won in under a minute and in his other three fights he won by knockout. In his last three fights he knocked his opponent out with a knee. Susurkaev is explosive on the feet with his knees and a sneaky good head kick. His grappling as well looks good but it’s hard to tell what level it’s at. He fights Artem Kuzmin (4-6).

Pasquali has a really good jab and a right he throws behind it. He does get hit a lot but has proved to have a good chin. He’s always going to be in the face cutting off the cage. Outside of being a dangerous striker he does have fair wrestling and has slick grappling. It seems as though he does need to work on his cardio, which is perhaps his biggest flaw. Still green but a lot of talent. He fights Paull McBain (7-2).

Wrestling is where Loughran transcends. He’s at best when he’s mixing in his wrestling and striking. His timing on his level changes is usually spot on. If he can’t get the takedown right away he does a good job driving in on the legs and hips to work guys to the mat. Credit his vision, size, and speed for the reason his wrestling is so valuable. Ireland’s Loughran has only shown glimpses of his capability on the feet. What he has displayed in brief flashes is his quick feet and light footwork. He fights Bakhtyaar Oryakhail (1-0).

From Kazakhstan, Kabardiev had an extensive background in Pankration before coming to MMA. His style in the cage you can see his upbringing in Pankration. Kabardiev is a diverse striker/kickboxer at range that moves in and out. He throws a lot of output while being tricky with feints. He blends his kicks/punches together and is good in the clinch with elbows and knees. Kabardiev is good at using them trips in the clinch and has had significant top position in his fights. His takedown defense is sketchy but does scramble really well. He fights former UFC fighter Valmir Lázaro (19-7).

Goff is a bright prospect that has looked much improved lately. Two years ago he lost two consecutively and now has won his last four. Goff can stand and bang, wrestle, grapple, and tough it out going three rounds. His toughness and grit is what’s usually unmatched. He hits hard and throws good output. Goff throws with a lot of weapons and can mix up his attacks. He could just be an action fighter but he does have some real skill. Goff fights former UFC fighter Justin Sumter (8-4) for a chance to become CES double champ.

George is all business once the bell rings. Usually, with him, it’s a scrappy fight that doesn’t last too long. George throws a lot of wild output making it an ugly fight which he thrives in. He does throw combinations and can wrestle but tends to just let it all go. I’m not fully sold if he’s a good prospect or not. He fights Emiliano Calderon (1-1).

Undefeated as a pro, Duncan had an extensive amateur career mostly for IMMAF. He went 17-6 as an amateur before going pro, where he’s been excelling. All that experience has made Duncan into a well-rounded top prospect out of the UK. On the feet, Duncan is known for his diverse, tricky style. He’s always throwing flashy spinning attacks but he’s done a good job setting it all up. Both his hands and legs are very dangerous. He’s always throwing something different and is tough to read. Duncan is a solid wrestler and grappler as well. He needs work with takedown defense but can very well hold his own and not to mention he’s a submission threat. He fights Djati Mélan (8-0).

Melan is the current Cage Warriors middleweight champion. His striking is a bit better but still progressing, though he makes up for it with wrestling chops. He’s a really strong wrestler with a pressure heavy attack. Melan can do it all fight too, with an (almost) endless gas tank. He did gas out his last fight but that was his first time going five rounds. Melan has good ground and pound, strong top position, and is overall a really good grappler. Melan has a bright future ahead of him. He fights Christian Leroy Duncan (5-0).

Gerardo Fanny of the Netherlands is a stud. Since moving down to flyweight Fanny has looked better and you can tell it’s where he should’ve been fighting for a long time. Beating guys like Connor Hignett and Liam Gittins is no joke. Fanny is the type of guy you tune in to watch every time. He will get taken down but if you don’t finish him there he’ll catch you on the feet. He’s explosive, powerful, and quick. Fanny fights Aaron Aby (12-4-1).

Hazan has a background as a two-time Italian freestyle and Greco-Roman wrestling champion. He’s a smothering wrestler/grappler always pressing and making the fight ugly.  He does a lot of stalling but is dominant in positions. He can even be a little boring at times but he knows what to do when he’s inside his preferred range. Hazan fights Raymison Bruno (12-3).

The book is still wide open on Hadji as footage lacks and competition lacks as well. Hadji is a taekwondo black belt and a blue belt in BJJ. Although he shows that taekwondo style with his flashy kicks he’s a better grappler. Hadji has scored some excellent takedowns in his highlight package. On the mat he has finished with ground and pound and submission. So much is unknown but he looks really talented. He fights Adam Cullen (3-0).

Cullen has looked stellar so far in his pro career. He’s won all three of his fights in the first round all by the way of an RNC. Cullen is aggressive out of the gate with pressure. He has some pop behind his left hand but expect him to shoot. The wrestling has looked solid being able to readjust when needed. Cullen on top will posture up and give space and let his opponent make his move. As soon as they do Cullen easily takes the back and finds the RNC super quickly. He fights Ndiaye El Hadji (4-0).

Edwards was supposed to fight on Dana White’s Contender Series back in 2019 but an injury forced him out of the bout. Since then he has earned two more wins including a victory against Contender Series veteran Lance Lawrence. Edwards has a good amount of experience and is at his peak at 32-years-old. He fights Josh Harvey (8-1-1).

I’m not fully sold on Bogdanović but he’s got some potential. He’s primarily a wrestler/grappler. Not much on the feet and that’s why he usually shoots for the legs as early as possible. Bogdanović has a solid single-leg takedown he uses to get the fight down. Real proficient on the mat, he’s methodical with his transitions. Bogdanović has four submission wins including a north-south choke which is something you don’t see often. He fights Jackson Loureiro (12-1-1).

Errens is a top prospect out of the Netherlands with good experience, who is still only 26. On the feet is where he is best, where he can fight at his preferred range. Errens throws straight punches and a lot of leg kicks to maintain the range. He closes distance pretty quickly when throwing bigger shots like the flying knee and spinning attacks. Errens has the volume and mixes up his weapons to keep his opponents guessing. His takedown defense is his biggest flaw. He at least has a good ground game and holds five submissions. He fights Mert Özyildirim (9-3).

Since losing his first fight, Dulatov hasn’t lost again winning his next five bouts. Dulatov is huge at 6’6″ and uses his length to his advantage. He’s a really rangy guy with a good jab and straight punches. He makes opponents pay coming in with step-in knees and is just difficult to close the distance on. I’m not fully sold on him but lately, he’s been impressive. Dulatov fights Michael Rirsch (9-5-1). 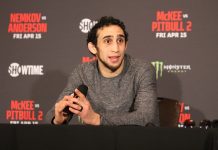 Bellator 277: Adli Edwards “Not Afraid of Any of These Guys in the Division”