London — It’s been a while since fight fans have seen Arnold Allen, but the featherweight is back in a big way at UFC Lodon.

Allen (17-1) is set to take on Dan Hooker in the English card’s co-main event, which marks Hooker’s return to 145lbs, and Allen’s first fight in 11 months.

“Big name,” Allen said of his opponent, speaking to media outlets including Cageside Press at the UFC London media day on Wednesday. “I know he’s not ranked at featherweight, but it does good things.”

Good things, including the “top five,” Allen hopes. And then? Onward and upward to a title shot.

Putting it another way, “It’s the one that’s gonna put my name out there, it’s gonna solidfy my position,” said Allen. “It’s the one.”

Asked what he was expecting to see from “The Hangman” at UFC Lodon, Allen quipped “I expect to see the featherweight Dan Hooker.” But it was more than just a joke in the end. Hooker isn’t debuting at 145lbs, he’s returning to it, and that distinction appears key to Allen. “He’s fought there before, and he’s done his best work at lightweight. And I’m pretty sure that’s where his best work is going to stay.”

Ahead of the fight, former UFC middleweight champion Michael “The Count” Bisping singled out Allen and Tom Aspinall as standouts among British fighters.

“Arnold Allen is on an eight or nine fight win streak and he’s just not getting the recognition he deserves because he’s not really a talker,” Bisping told talkSPORT. “But he’s in the co-main event this weekend against Dan Hooker and if he can pull that off, he’s going to start getting a lot of attention.”

Allen hadn’t caught wind of the comments before Wednesday’s session with the media.

“That’s huge,” he responded. “Someone like Bisping, every UK fighter growing up I’m assuming watched him. If there’s anyone with an inspirational career, it’s him. So if he’s saying good things about me, that means a lot.”

Watch the full UFC London media day scrum with Arnold Allen above. More coverage from the event can be found below. Allen faces Dan Hooker in the co-main event at the Fight Night card this Saturday, March 19, 2022 at the O2 Arena in London, England. 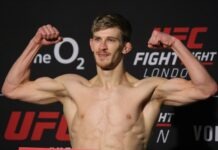