Fighting out of Jersey City, New Jersey, featherweight prospect Francis Marshall is an up-and-comer with an undefeated 4-0 record. Marshall started his MMA journey in 2018, but in reality, it dates back even further, since as a kid Marshall grew up in combat sports.

“When I was about thirteen my dad wanted to get me more active outside football season and during the winter,” Marshall told Cageside Press in a recent interview, “so I signed up for Jiu-Jitsu at Kurt Pellegrino’s MMA.”

Outside of MMA Marshall competed in many IBJJF tournaments and won multiple some silver and bronze medals, along with several gold medals. Marshall wrestled his junior and senior year of high school, becoming a two-time state qualifier and a one-time district champ while also being a  regional champ in New Jersey.

“I feel like getting training in multiple disciplines has helped a lot to form me as more of a well rounded, but still a grappling dominant fighter,” Marshall said of that experience.

In a little over a year, Marshall was able to fight five times as an amateur. He won all five fights. Finishing four of those five wins, he also was crowned the Bayou FC lightweight champion. At the end of 2019, Marshall made his pro debut.

“My decision to go pro was mine and Kurt’s decision,” Marshall recalled. “He felt like I was ready after having my last two amateur fights with pro rules, and I trusted his decision.”

It’s clearly worked out. Marshall won his pro debut, and has added three more victories to date. His next fight comes at Ring of Combat 75 on February 18, where he’ll take on Michael Lawrence. Looking to stay active, Marshall has a second fight booked for the following month.

Marshall trains out of Pellegrino Mixed Martial Arts in New Jersey, and a few times a week out of Martinez BJJ in Philly. Aside from MMA, Marshall is also a firefighter in Jersey City.

Like many fighters who saw COVID-19 impact their careers, Marshall had to deal with cancelled fights, and went sixteen months without competing following his pro debut. When he was finally able to fight last March he knocked off three fights within six months. Although he’s only been a pro since late 2019, he’s built up an impressive career thus far.

“In three years I see myself fighting in the UFC, potentially in the top 10 or 15 fighting high-level guys,” predicted Marshall. “Fans can always expect an exciting fight where I’m gonna bring it my all and leave everything out in the cage.”

Marshall is set for his biggest fight to date fighting for Ring of Combat this Friday. ROC is a staple promotion out of New Jersey and fighting there puts a lot of eyes on you. It will be Marshall’s first fight for ROC and it will be against thirteen-fight veteran Lawrence — who happens to be a former ROC title challenger.

“I think my opponent has a good amount of experience and he fought some good guys and it should be an exciting fight!” said Marshall. “Fans can always expect an exciting fight where I’m gonna bring it, give my all and leave everything out in the cage.”

Outside of training, you can catch Marshall swinging the golf club in nice weather on the course instead of swinging leather, but most of his life consists of training and fighting.

Francis Marshall faces Michael Lawrence this Friday, February 18, 2022 at Ring of Combat 75 at the Tropicana in Atlantic City, NJ. 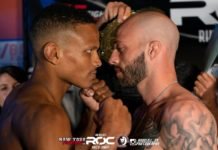