Houston, TX – One may wonder what an MMA fighter is thinking after finishing an opponent in violent fashion in front of thousands of fans on a big PPV where that win may have gotten them a title shot.

For UFC middleweight Jared Cannonier, who finished Derek Brunson via knockout at UFC 271 on Saturday night, the though was very simple.

“Yes! I did it! Just like I said I was,” Cannonier told the media at his post-fight scrum.

Brunson (23-8) employed a wrestling heavy attack against Cannonier which was expected.

“That’s what we all expected, right? We’ve seen it before and we’ll see it again probably. At least two more times, that’s what he said, right? That’s exactly what I expected. I expected him to go for those shots. I expected to defend them more, but I did expect him to maybe…I didn’t expect him to be successful, of course we planned to be successful in our defense. I was prepared for him to do that. Anybody who’s watched me throughout my middleweight career, we’ve seen this before. They get the takedown once, maybe twice, but as soon as they get tired, I mean it’s a lot of work for them to try and get that takedown. If they do get me down I’m getting right back up. And I’ve gotten even better at getting up.”

Cannonier (15-5) came into UFC 271 with the assumption that a dominant win over Brunson in Houston would get him a title shot against the middleweight champion next. During his post-fight interview Cannonier called out to Dana White demanding his shot.

“Of course what else would I be talking to him about? Either a title shot and or the bonus. It was the first knockout on the thing, but then Tai just did his thing so. I got some competition apparently, but I think I did better. I don’t know. Whatever, whoever makes those decisions makes those decisions. I at least got my two checks and a title shot,” Cannonier said.

Winning the title would mean the culmination of the years of work would finally pay off for Cannonier.

“All of this hard work coming to fruition, you know? That’s the path that I’m on it’s the only reason why I would stay here in the UFC is to go for the title. I’m no journeyman, I’m no gate keeper, I’m the Killa Gorilla.” 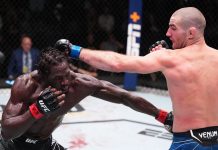