Among several debuting fighters on the UFC Vegas 47 card was Brazilian Jailton Almeida.

With a nine-fight win streak, and plenty of grappling experience as well, light heavyweight Almeida was paired up with fellow Brazilian Danilo Marques. Marques was looking to bounce back from a loss to Kennedy Nzechukwu, after getting his hand raised in his first two bouts inside the promotion.

As the bout got underway, it didn’t take Dana White’s Contender Series winner Almeida long to take Marques down. From there, Almeida transitioned to the mount quickly. Marques tried to roll away, but Almeida threatened the rear-naked choke. Marques went back to his back and Almeida went off landing a barrage of hammer fists.

This pattern repeated itself several times: the hammer fists forced Maques to give up his back, the danger of a choke forced him to roll back over. As the shots continued raining down and Marques didn’t move in one particular return to his back, the ref stepped in and called it.

🇧🇷 Scary hammer fists from @JRMalhadinho gets him the first round finish!

[ #UFCVegas47 is LIVE on @ESPNPlus ] pic.twitter.com/cyNYpaHTfr

“I want to fight Shogun [Rua]. I’ve admired him forever,” Almeida said followed the fight when asked about who he wanted to fight next. 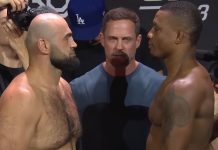 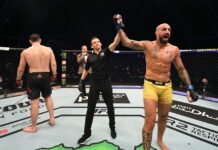