Former title challenger Alexis Davis got back into the win column at UFC Vegas 47, with a win over Julija Stoliarenko.

The lone fight on the female side of things at UFC Vegas 47 featured Canada’s Alexis Davis up against fellow bantamweight Julija Stolianrenko.

A former title challenger, Davis was 1-1 since returning to the 135lb division in 2021. Stoliarenko, who suffered a scary mishap at weigh-ins last year, appearing to faint ahead of her fight with Julia Avila, was 0-2 since joining the UFC as a former Invicta FC bantamweight champ. 0-3, counting her 2018 bout at The Ultimate Fighter 28 finale.

Davis jumped on top to start the bout after Stoliarenko slipped to end up on her back. Davis jumped in guard and began landing big ground and pound, but Stoliarenko locked up a deep armbar attempt. However, the Canadian battled out and began landing some shots from the top. Stoliarenko continued to look for the armbar for the rest of the round to no avail. The biggest moment came near the end of the round, as Davis ate an illegal upkick that temporarily halted the fight for several minutes.

Stoliarenko answered Davis’s grappling in round two with a wild stand-up approach. The former Invicta FC bantamweight bloodied up her Canadian counterpart with a variety of left hands and began to find a home for her calf kick as well. Davis for her part continued marching forward and showcased her trademark toughness to lead into the third and final round.

Davis opened the final round with a massive calf kick of her own, that dropped Stoliarenko. The Canadian jumped in the guard and began raining down blows while her opponent began to look for an armbar. Davis dominated the rest of the round from the top, and bloodied up Stoliarenko with elbows while the former Invicta FC champion was unable to stop any of the damage from the bottom. 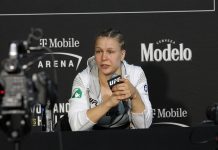