Anaheim, CA – For UFC bantamweight Cody Stamann his opponent at UFC 270 is an opportunity to prove that American wrestling is superior to Dagestani wrestling.

Speaking to the media on Wednesday Stamann spoke on what his opponent, Said Nurmagomedov, brings to the octagon.

“Tough kid. I don’t see anyone in the top 25 at bantamweight who’s not legit. I think Said is going to be good everywhere. Is he the toughest guy I’ve fought I don’t think so but he brings a lot of challenges to the cage. But I’ve been training with guys like him most of my fighting career so I feel like I’m pretty equipped to defend against what he brings to the table,” Stamann said.

Stamann (19-4-1) knows he has high-level wrestling and may need to use it against Nurmagomedov (14-2-0) but he prefers to keep the fight on the feet and make it exciting for the fans.

“I know he’s Dagestani but I think he’s more of a kickboxer than a wrestler. I think if I wanted to I could go in there and shoot 40 times and take him down 10 times in this fight. That’s not something that I care to do. I really don’t want to be known as a wrestler even though that’s kind of something that I think has kind of stuck with me. If you wrestled everyone’s like ‘Ah. F*cking boring wrestler’. I don’t want to be known as that, but if there’s one aspect of the game I feel there’s a vast difference between Said and I it’s in the wrestling department.”

“I think the best wrestling in the world is in the USA. If I have to i’ll prove that.”

Nurmagomedov said earlier that after he defeats Stamann he wants a matchup with either Sean O’Malley or Marlon “Chito” Vera.

“I mean that’s a pretty big claim. Everybody says that, right? I’m going to sit here and tell you I’m going to whoop Said for 15 minutes. I think that’s smart of him to say that. That’s the game. I think those are good fights for him but, like I said, I think he’s got something coming Saturday. I don’t think this is going to go the way he thinks it is.”

Watch the full UFC 270 media day appearance from Cody Stamann above. Stamann takes on Said Nurmagomedov this Saturday, January 22, 2022 at the Honda Center in Anaheim, CA. More coverage of Wednesday’s media day can be found below. 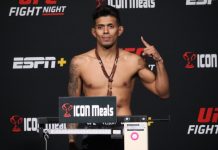 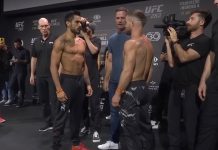 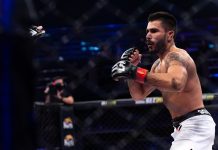