The UFC is finally headed back to London, England.

On Wednesday, the promotion officially announced what had been rumored for weeks: their March 19 Fight Night event will in fact take place in London. The event, with a number of British fighters already attached, will take place at the O2 Arena, with tickets going on sale February 4.

We are finally coming back to #UFCLondon on March 19! Register now to get early access to tickets ⤵️

The last time the UFC hit the British capital, Jorge Masvidal hit Darren Till with a thunderous knockout blow in the main event. That was March of 2019; the promotion has not returned since, a result of the ongoing coronavirus pandemic.

In March of 2020, the annual London show was scrapped at the 11th hour, leading to a mad scramble of fights being rebooked/rescheduled. One bout originally attached to the event, Darren Stewart vs. Bartosz Fabinski, was actually shifted to Cage Warriors 113, which took place the day prior to the cancelled London card.

Another attempt to mount a return to London fell through in 2021. It seems as if this year’s card is a go, however.

To date, the following bouts have been reported for the UFC’s return to London on March 19, 2022: 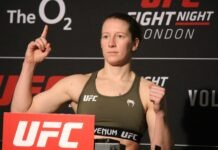 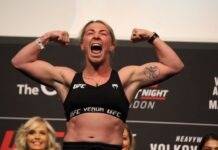