After a move to featherweight at March’s UFC London card that resulted in a decisive loss to Arnold Allen, Dan Hooker is done with the 145 pound division.

Speaking to Submission Radio on Monday, Hooker announced both his return to the lightweight division, and that he would be taking a “good amount of time off” to reset.

As for his next fight, “I’m just chilling. I should have a good amount of time off,” said Hooker. “I should just have a good reset. That’s one thing I realized, as well: I’ve just been kind of chasing my tail the last couple of years. I’ve just put the shovel down. I’m still in, like, shovel down mode. I’m thinking, f*ck, how do I get out of this situation? We’ll see. Maybe when the UFC comes a little bit closer [to his native New Zealand].”

When it comes to the loss to Allen, meanwhile, Hooker wasn’t making excuses. He made weight successfully for the fight, and wasn’t prepared to blame the weight cut for performance. “Everyone’s going to put it down to the weight cut,” said Hooker, who instead owned the loss. “It only comes down to the manner in which that I fought. That’s what it comes down to. It’s just one of those things, got out there, started warming up, looked down at my hands, and was like ‘tonight’s one of those nights, we’re going out there we’re swinging.'”

Turns out, that wasn’t the best game plan in the end. 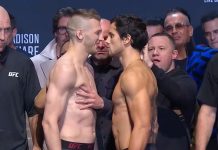