The lightweight scrap between Dakota Bush and Viacheslav Borshchev at UFC Vegas 46 was flying somewhat under the radar — perhaps because it was one of the few bouts on the Fight Night card that hadn’t been altered due to illness or injury.

Let’s all take a moment to marvel at the fact that Dakota Bush is still running with the nickname “Hairy” — in an ultra intense sport such as mixed martial arts, the injection of a little humor, no matter how crass, is always a welcome sight.

Unfortunately, ring announcer Bruce Buffer didn’t announce him as such.

The early going of Bush vs. Borshchev was fast-paced, with Bush finding a takedown or two. Bush definitely found some success near the midway mark of the opening round, rocking his opponent, connecting more than once. In the grappling department, Bush looked strong as well, landing another takedown with about two minutes remaining. But Borshchev reversed, only for Bush to escape and press him into the fence.

Then, the the tides turned. Borshchev fired a left hook to the body that absolutely crumpled Dakota Bush. The shot to the ribs instantly took the fight out of the American; even as he hit the canvas, Viacheslav Borshchev was already on him, adding in some hammer fists to put the fight away.

The first UFC stoppage of 2022 belongs to Viacheslav Borshchev! 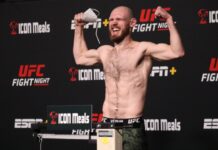