Welterweight action has been added to the UFC’s February 26 Fight Night event, as Jonny Parsons will make his promotional debut against Michael Gillmore.

Parsons (8-2) will be making his promotional debut, after picking up a split decision win on Dana White’s Contender Series against Solomon Renfro last season. Despite the close nature of the bout, it was enough to cash Parsons’ ticket to the UFC.

The win was Parsons fifth straight.

Gillmore (6-4) was something of a feel-good story last year, though it hasn’t quite worked out for him in the cage just yet. The 34-year old quit his job for an opportunity on The Ultimate Fighter 29. Although he wasn’t selected for the show initially, he stayed ready, and was soon called upon as a short-notice replacement.

Despite losing on the show, Gillmore was rewarded with a UFC deal. He lost his promotional debut against fellow cast member Andre Petroski back in August at the TUF 29 Finale. Come February, he’ll get one more chance to make an impression on the UFC faithful.

The UFC’s February 26, 2022 Fight Night card is expected to take place at the Apex in Las Vegas. Beneil Dariush vs. Islam Makhachev is set as the lightweight headliner. The following bouts have been reported for the card: 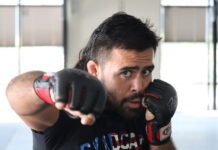