The UFC 272 card is looking to spice things up a little, with the addition of “Ghost Pepper.”

On Wednesday, Erick “Ghost Pepper” Gonzalez and his management group announced that he’d be fighting Devonte Smith at the March event. The fight finds both lightweight fighters looking to get back in the win column.

Gonzalez (14-6), long a staple of Combate Americas (now known as Combate Global), entered the UFC on short notice against Jim Miller last year. He wound up knocked out in the second round, snapping a four-fight win streak.

Devonte Smith (11-3) was also finished in his most recent outing. That came against Jamie Mullarkey last October. Overall, the Contender Series alum is 3-2 inside the octagon. None of his fights, win or lose, have gone the distance.

UFC 272 is expected to take place on March 5, 2022, at the T-Mobile Arena in Las Vegas, NV. Currently, the card is headlined by Jorge Masivdal vs. Colby Covington, with a bout between Nate Diaz and Dustin Poirier also in the works.

The originally planned title fights for the card, Alexander Volkanovski vs. Max Holloway 3, and Aljamain Sterling vs. Petr Yan 2, have shifted to April’s UFC 273. With Holloway out due to injury, The Korean Zombie is expected to face Volkanovski on that card. 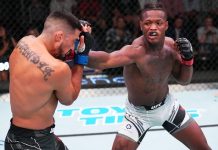