After battling across a full six rounds at RIZIN 33 on Saturday, former Shooto bantamweight and featherweight champ, and VTJ flyweight tournament champion Hiromasa Ougikubo walked away with another grand prix title under his belt.

An Ultimate Fighter alum, Ougikubo took the fight to Kai Asakura throughout the RIZIN bantamweight grand prix final, keeping up the pace throughout the full 15 minutes. While Asakura was more than game, veteran Ougikubo pulled off the upset, using a well-rounded game plan to pick up the decision win. Takedowns were key in the early going, with Ougikubo scooping Asakura up and planting him on his back more than once. That, combined with a leg kick-heavy attack, kept Ougikubo ahead in the fight.

The final minutes of the third round saw the action heat up. Asakura pushed hard for a finish, and nearly had it, coming just short on a front kick with about thirty seconds left in the fight. Ougikubo would survive that, tie Asakura up late, and run out the clock.

Both Asakura and Ougikubo won their semifinal bouts early on the RIZIN 33 card, each going the distance across three rounds to claim unanimous decision victories. For Ougikubo, his semifinal victory came against UFC alum Naoki Inoue, a minor upset dwarfed by the one that would come in the tournament final later in the evening.

Following his grand prix win, having competed a full thirty minutes through two fights, Ougikubo took to the mic to propose to his girlfriend, who was seated in the crowd. She said yes — ending RIZIN’s annual New Year’s Eve card on a high note.

Earlier in the night, RIZIN lightweight champion Roberto “Satoshi” Souza successfully defended his title, in a rematch with Yusuke Yachi. The pair had originally met a year prior, with Satoshi earning the finish with ground strikes. On New Year’s Eve, in his first title defense, Satoshi had to overcome a bit of adversity, bloodied early in the fight. But in the end, he took the fight into his wheelhouse, using a kimura to transition to a triangle, then finishing with an arm-bar in an incredibly slick sequence in the second round.

The victory marked the third straight submission win for the champ, who has not tasted defeat since a 2019 loss to Johnny Case — who coincidentally was working the RIZIN 33 broadcast as an analyst.

Kickboxing sensation Tenshin Nasukawa competed for the final time under the RIZIN banner on Friday. Undefeated in both MMA and kickboxing, the 23-year old Tenshin is expected to pursue a boxing career next — but first has a summer date with K-1 champ Takeru. For his “last dance” in RIZIN, however, it was UFC vet Takanori Gomi facing the striking phenom — and holding his own, battling to a draw in the exhibition contest. Being fair to Tenshin, Gomi did hold a 30lb weight advantage.

One of the biggest upsets of the card came immediately following the show’s intermission. Rena Kubota was as much as a -2500 favorite with some odds makers. The lopsided numbers against DEEP atomweight grand prix semifinalist Si Woo Park proved erroneous, with Park winning a unanimous decision to snap Rena’s four-fight win streak.

Full results from RIZIN 33 can be found here. 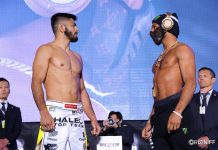 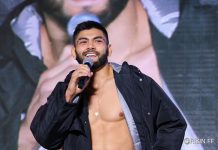