Knockout of the Year was an easy call in 2020. Probably the easiest call ever thanks to Juaquin Buckley and the kick heard around the world. 2021 was a little more competitive. Do you go with a dazzling flying knee? A head kick that claimed (or reclaimed) a title? A legend being finished on the feet for the first time?

There were lots of stunning KOs to choose from. Here’s how we broke it down.

Jay Anderson: Cory Sandhagen started the year strong with a flying knee KO of Frankie Edgar. Francis Ngannou knocked out Stipe Miocic. Rose Namajunas landed a head kick on Weili Zhang that turned more heads than just her opponent’s. Over in Bellator, Roman Faraldo called his shot Babe Ruth style, pointing to his opponent then launching into a flying knee. In this case, both flying knees left a lasting impression, but Sandhagen’s came against a former champ. Sandhagen it is.

Farzin Vousoughian: Rose Namajunas’ head kick versus Weili Zhang. Step aside, Holly Holm. There’s another fighter out there who mastered a perfect, unexpected head kick against a very impressive opponent. It was Rose Namajunas’ second ever knockout. Oddly enough, her only two knockouts have come when she’s challenging for a title.

Eddie Law: Going into UFC 257 everybody echoed the usual McGregor line about his left hand and his striking. Dustin Poirier couldn’t care less as he took it to McGregor, dropped him and finished him on the ground with strikes. Vindication for “The Diamond” and setting up a rivalry that would take an unexpected turn in their trilogy fight.

Alex Behunin: Emily Ducote vs. Danielle Taylor – Ducote’s knockout of Taylor was absolutely brutal. Ducote put Taylor basically out of her feet and then finished her off a head kick. If you have not seen it, seek it out.

Gabriel Gonzalez: Usman vs Masvidal 2. There were plenty of great knockouts in 2021, but the high stakes in this one give it my pick for the award.  Of all the outcomes many projected going into the rematch, an early knockout for Usman while Masvidal was still fresh and at his most dangerous was perhaps the most dramatic that anyone could have written.  In the context of Usman’s run, to take some of the shine off of the “BMF” and officially become only the second fighter in UFC history to record 14 consecutive with this performance seals the deal for knockout of the year.

Justin Gibbons: I knew instantly what my Knockout of the Year was going to be as soon as I saw Cory Sandhagen land a flying knee on Frankie Edgar at UFC Vegas 18: Overeem vs. Volkov. The viciousness of the KO was added by how quiet the UFC Apex got, as a legend of the sport like Frankie Edgar crumpled to the canvas. The way Cory Sandhagen walked off was just so stone cold, and calling for his shot at the title was just another reason to why this was my knockout of the year.

Michael Lynch: Poirier vs. McGregor 1, marking the first time Conor was finished with strikes in his entire career.

Josh Evanoff: Cory Sandhagen’s flying knee against Frankie Edgar. To absolutely ice a legend like Edgar a mere thirty seconds into the bout is mindblowing, and incredible to watch even now.

Bryson Hester: My pick for KO of the year is Jiri Prochazka’s spinning elbow KO over Dominick Reyes back in May. This fight was a barn burner for how long it lasted. And it really seemed like Dom was looking good and was very defensively sound, before being caught by a masterfully timed spinning elbow that folded him to the canvas.

Shawn Bitter: For me it’s Jiri Prochazka knocking out Dominick Reyes. For one it was a great fight that ended with a spinning elbow. A knockout you don’t see often and was actually a terrifying knockout where you worried about the well being of Reyes. It also solidified Prochazka as a real contender in the light heavyweight division.

Daniel Vreelannd: Cory Sandhagen KOs Frankie Edgar. While there were a lot of spectacular KOs this one sticks out as maybe the greatest flying knee of all time (yes, really). The way that he lures a veteran like Edgar into the knee, the walk off, the swagger — everything was just perfect.

Dan Doherty: Kamaru Usman vs. Jorge Masvidal. The sheer force Usman generated from that right hand. The sweat spraying off Masvidal’s head in picturesque fashion. The payoff of Usman beating Masvidal on the feet after Masvidal’s insults about Usman’s gameplan in the first fight. It was a straightforward technique that looked so beautiful. 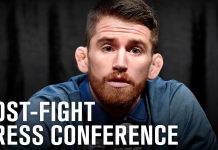