2021 saw the return of fans after an extended run of empty venue shows from multiple MMA promotions. The UFC set up shop in the Apex, Bellator holed up in Uncasville, ONE Championship ran their events in their home base of Singapore. With Bellator, the UFC, and others welcoming fans back partway through 2021 — even in fits and starts — cheers filling the venues again gave certain events a certain atmosphere.

That no doubt played a role in determining the MMA event of the year for 2021 — but we tried to stay focused on the fights!

Jay Anderson: A lot of people will pick the return of fans at UFC 261 for Event of the Year. I’m one of those people who enjoys MMA regardless of there being 10 people in the stands, or 10,000. The New York card would be tempting, with Gaethje vs. Chandler, but overall, UFC 269 was a better card. Both title fights delivered. Julianna Pena shocked the world. Charles Oliveira proved deserving of the title. The undercard was lit.

Farzin Vousoughian: UFC 261. There were better fight cards. But this event deserves the honor because it was the first event with a full capacity crowd since the pandemic. It was something we all missed seeing in the UFC.

Eddie Law: UFC 261. All finishes on the main card and plenty of talking points came out of this one. Chris Weidman breaking his leg on Uriah Hall brought back shades of Weidman vs. Anderson Silva 2, Valentina Shevchenko making the win over Jessica Andrade look easy, Rose Namajunas regaining her belt by taking Zhang Weili out with a head kick KO. Then to top it off the rematch between Kamaru Usman and Jorge Masvidal after the latter asked for a full camp to fight for the title. Usman took him out in the second round with a beautiful right cross that put Masvidal to sleep for the first time in his UFC career. Incredible night.

Alex Behunin: UFC 261 was the first event back with a sold out crowd and it was a special one. Every single fighter brought it from the first prelim to the main event. All the fights on the PPV ended in stoppage (for better or worse). Rose Namajunas won, regaining her title, Valentina Shevchenko dominated Jessica Andrade and Usamn knocked out Masvidal.

Gabriel Gonzalez: UFC 268. The event so exciting, fans literally could not keep the fever pitch up through to the end of the card.  It’s easy to forget just how good the prelims were going by the time the main card launched with 15 minutes of carnage between Justin Gaethje and Michael Chandler.  It unfairly made the perfectly exciting victories for Shane Burgos and Chito Vera seem like post-lims before fans gained a second wind to see elite talents in Rose Namajunas and Kamaru Usman be tested in their title defenses.

Justin Gibbons: UFC 260: Miocic vs. N’Gannou 2 is my Event of the Year, with so many powerful moments. A combination of a heavyweight title being on the line, Tyron Woodley and Vicente Luque’s first round war, Sean O’Malley’s vicious KO of Thomas Almeida, and also throw a Von Flue choke in the mix made this an event to remember.

Josh Evanoff: UFC 261. The first card with fans back was a wild one. Three title fights, all of which ended in finishes helped highlight a card that was electric from the first bell.

Bryson Hester: My pick for event of the year is UFC 268. This card had it all. The Usman vs Covington rematch, that delivered. The Rose vs Zhang rematch, also delivered. Not to mention the main card started out with FOTY contender, Justin Gaethje vs Michael Chandler. With all the winners being coached by Coach of the Year Trevor Whitman. Chito Vera KO’d the legend Frankie Edgar and on the undercard stars arose in performances from Alex Pereira and Ian Garry. Not to mention exciting finishes from Chris Barnett and Bobby Green that all but retired their noteable opponents (Gian Vilantte and Al Iaquinta).

Shawn Bitter: UFC 261 is the obvious choice. Three title fights with Usman knocking out Masvidal in the main event. Also Namajunas reclaiming her title and Shevchenko retaining her flyweight title for the fifth time against Jessica Andrade. Also on the card Chris Weidman broke his leg, Jimmy Crute suffered a nasty injury, and the prelims were all action packed.

Daniel Vreeland: UFC 268. We had Gaethje Chandler on this card, which gives it a huge bump. We also have both Fighters of the Year in my mind getting wins. Plus a huge upset with Chris Curtis beating Phil Hawes. You also had the Huggy Bear spinning heel kick. It was a remarkable event.

Dan Doherty: UFC 261. The prelims weren’t anything to write home about but that main card was something else. It starts with two freak leg injuries, then we get to the three title fights. Valentina Shevchenko ran through Jessica Andrade in another great performance. Rose Namajunas then stunned Weili Zhang with a first-round knockout after we saw Zhang throw down with Joanna Jedrzejczyk for 25 minutes. Incredible. The main event delivered with Kamaru Usman knocking out Jorge Masvidal with a brutal right hand. Of course, this event had the extra importance of having a sold-out crowd in the US after months of events in the empty UFC Apex (with the exception of trips to Fight Island). It was great to hear a full house pop during big moments again.

End result: Garnering 50% of the vote, UFC 261 wins Event of the Year for 2021. While fans being back in the building no doubt helped, three title fights certainly didn’t hurt — nor did Usman’s KO of Masvidal, and “Thug” Rose unleashing the head kick on Weili Zhang. 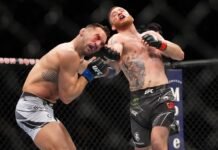 MMA 2021 Year in Review: Knockout of the Year