Right away I’m really impressed with Dumas. Not only his kickboxing but I like everything Dumas brings to the table. Dumas is a big dude especially fighting at 185 and standing at six-foot-three. He uses every bit of that length on the feet and on the mat.

The first thing you notice when watching Dumas is how often and quickly he lets his kickboxing set the pace. He loves to chop away at the legs and then go high – sometimes to the opposite side. All his work he does with his legs opens up his striking even more. Dumas has really good distance management on the feet, with of course his kicks but his striking as well. He has a stiff jab and strikes really well long, keeping guys at the end of his punches. He fights very patiently picking his spots and it’s a big reason why he can fight as well as he can later in fights. Putting fights away he does well at too as it’s either him clipping you or breaking you over the course of the fight.

Dumas isn’t just a striker/kickboxer as he’s a pretty good grappler as well. Even the moments he’s found himself on his back he’s good at scrambling to get on top. Using his long frame taking the back and just attacking the neck he’s a threat. His only loss dating back as an amateur was to Miles Lee. Anyone who knows Lee knows he’s a solid prospect. Dumas was just out-wrestled but those were three two-minute rounds so not a lot of time to do much of anything. I like Dumas a lot as he’s the full package. 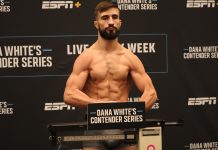