Las Vegas, NV — 2021 World MMA Awards Coach of the Year winner Trevor Wittman had an experience few will ever get at UFC 268 last month.

Wittman happens to coach Justin Gaethje, Rose Namajunas, and Kamaru Usman — all three of whom were fighting on the Pay-Per-View event’s main card. That actually necessitated a shuffling of the deck which resulted in Gaethje’s fight with Michael Chandler opening up the PPV show.

Ahead of Friday’s awards ceremony, Wittman recapped the experience that night with Cageside Press. Asked about how he handled the situation, Wittman said “you know, it’s like a duck on water. I look smooth on top, but the feet are kicking underneath. It wasn’t that easy. You always go into something and you’re prepared for it, but doing a new experience like that, you don’t know what to expect. What happens if the first fight, the fighter takes a loss? There’s so many things that go through your mind as a coach.”

The aforementioned card opener between Gaethje and Chandler, however, actually helped keep the night running smoothly for Wittman. “After Justin Gaethje’s fight, it was like, man, I was a fan again. It was so fun to watch,” Wittman recalled. “I didn’t even care about the outcome. It was just such a pleasurable fight to watch, and being able to see the athlete perform like that, it was just dialed in from that point on, and the night was very good to us.”

It was indeed. Gaethje defeated Chandler in a three-round unanimous decision that is in the running for Fight of the Year. Rose Namajunas then successfully defended her strawweight title in the rematch with Weili Zhang, while Kamaru Usman won another rematch, against rival Colby Covington.

So what after party does Trevor Wittman go to when three of his fighters win in a single night? “My own,” said Wittman, adding he hasn’t actually gone to any after parties in years.

“Especially after an event like that, I had nothing left. I was emotionally shot. I got to experience it with Rose and Kamaru before that, and I was so shot. Usually I stay in the back rooms with them and then I’ll go watch them go do their interviews. After that one, I was like ‘hey man I’ll meet you guys back at the room.’ I was shot. It really takes a lot out of you, at least it does for me.”

Watch our full interview with Trevor Witman from the 2021 World MMA Awards above. 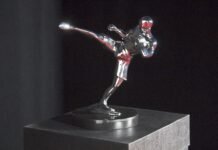