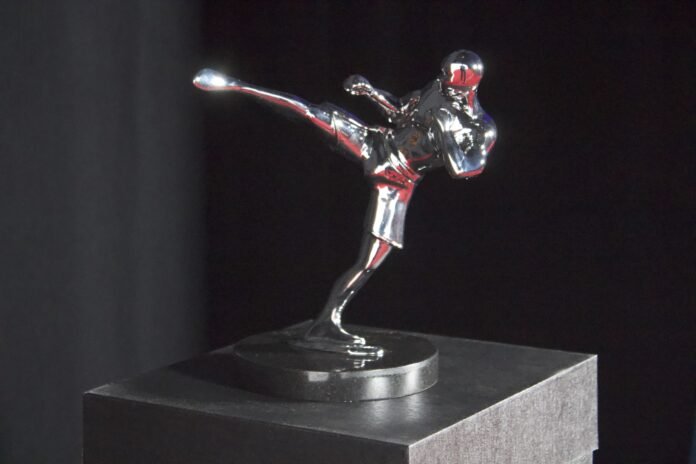 UFC flyweight champion Brandon Moreno, who defends his title this January, was the big winner of the entire evening.  “The Assassin Baby” won the award for Fight of the Year for his war with Deiveson Figuiredo last December, the Fighting Spirit Award for his perseverance in winning the title after having previously been cut from the company, and for Breakthrough Fighter of the Year in becoming one of the stars in the sport after an impressive campaign in the last twelve months.  Moreno also won over the crowd with his acceptance speech, playfully taking out a fake scroll with the notes of things he wanted to say.

Coach of the Year Trevor Wittman also took home major honors both for himself and his team as his athletes Rose Namajunas and Kamaru Usman took the awards for Female and Male Fighter of the Year.  Notably, while Wittman’s team took home the trifecta, the award for Best Team went to American Top Team.

Among the major upsets, Morning Kombat with Luke Thomas and Brian Campbell took the award for Best MMA Programming over Joe Rogan’s MMA Show and ESPN MMA’s DC and Helwani.  The biggest snub: Cageside Press which for the fourth year in a row was not nominated for Best MMA News Source despite their unparalleled greatness, an opinion that is certainly not biased in any way, shape, or form by any criteria by this writer.

UFC and Bellator veteran Chael Sonnen returned to host the show for the first time in over ten years and delivered a monologue that no fighter was safe from, most notably taking shots at everyone from Dillon Danis, Colby Covington, and even his former co-host Ariel Helwani.  UFC analyst Din Thomas also delivered a memorable skit, impersonating Stephen A. Smith delivering a factually incorrect report on MMA.