Jose Aldo is WCC alum as he made his Ultimate Fighting Championship debut at 145lbs back in 2011, before practically becoming the face of the UFC featherweight division for years to come.

Aldo was able to win the promotion’s featherweight belt in 2011 and hold it until 2015. However, after losing 4 out of 7 fights between 2015 and 2019 Aldo and his team decided it was time for a change.

To the surprise of many,  (5’7″, 70″) Aldo moved down in weight to the bantamweight division at the tail end of 2019. Jose was on a hunt to recapture a UFC belt and though there were many nay-sayers the Brazilian and his team were confident that he could make the transformation down to 135lbs smoothly.

Since moving down to 135lbs, Aldo has a .500 record. But most fans (including UFC President Dana White) thought that Aldo won his first fight at 135lbs against Marlon Moraes. So, Jose fought Petr Yan for the vacant bantamweight championship in 2020 but was finished in the final round.

Since then, Aldo has captured two wins at bantamweight in a pair of brilliant unanimous decisions against game opponents in Marlon Vera and Pedro Munhoz.

Aldo is just now reaching the age of 35 and with his new dieting, lifestyle, and weight class, has truly reinvented himself. 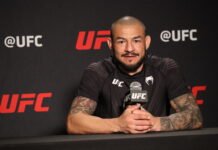