For her directorial debut, Emmy and Oscar winning actress Halle Berry delved into the world of mixed martial arts for the film “Bruised,” which premiered in select theaters Wednesday and is now available on Netflix.  In the film, Berry plays fictional former UFC star Jackie Justice, who has been away from the sport for several years.  Through a turn of events, Justice returns to the cage and is signed by a promoter to take on the ferocious “Lady Killer,” played by current UFC flyweight champion Valentina Shevchenko.

As a relatively new sport to the mainstream and a young sport overall, the number of screen adaptations of mixed martial arts stories have been few compared to the many done on boxing.  There have been dramatic, true to life works such as the film Warrior and the television series Kingdom.  There have also been comedies, with Kevin James’s Here Comes the Boom taking a more light-hearted take on the sport.

Bruised falls into the category of the former as Berry’s Justice deals with the arrival of her six year old son and her journey from dealing with alcoholism and living with an abusive manager as she finds herself back in the world of mixed martial arts.  The press tour largely focused on the MMA aspect, and much of the promotion centers on the fact that the finale culminates in a fight between Berry and Shevchenko’s characters in a fictionalized version of Invicta FC.  The majority of the film, however, has little to do with MMA and is more about Justice dealing with her personal demons, while her fight career falls into more of the secondary storyline.

The film opens with a montage of highlights from women’s bouts in the UFC and it is stated that Jackie was amongst the stars of the promotion.  However, the film abruptly shifts to a first person point of view where Justice finds her win-streak being snapped after being severely dominated in the cage.  From there, the story picks up four years later where a down on her luck Justice is fired as a house cleaner after assaulting her boss’s son, who crassly tried to film her as she was changing clothes.

Berry delivers a strong performance as an older athlete trying to turn her life around, dealing with struggles both internal and external as she tries to overcome a drinking problem and an abusive relationship with her former fight manager Desi (Adan Canto) to whom she returns to stay with.  Early on, it is clear that Justice has put her fighting days behind her as she ignores a group of teenagers who recognize her from her time in the UFC as she sits on the curb outside a liquor store following her firing.

With no other options to make money, Desi convinces Jackie to go to an underground fight club.  It becomes the catalyst for her return as Jackie gets into what is essentially a street fight with real life RIZIN star Gabi Garcia and leaves her a bloody mess on the floor.  Afterward, she is approached by “Immaculate” (Shamier Anderson) who is the promoter of the film’s version Invicta FC and promises Jackie a route back to the big show.

The driving force of the story is Jackie’s non-verbal six year old son Manny (Danny Boyds), who arrives on her doorstep after having witnessed the murder of his father.  It is revealed that Jackie gave up her son and left him with his father shortly after he was born and later that Manny’s father never discussed her with him.

It is here that the film struggles to find an identity with the story it tries to tell, and as a result leaves several unanswered questions as it attempts to navigate a tale of survival and the perseverance of the journey through sport.  The film hinges on Berry’s portrayal of Jackie boldly attempting to better her situation while enduring high levels of abuse from the characters closest to her.  Apart from her manager (whom she eventually leaves), Jackie deals with her opioid addicted mother (Adriane Lenox), whom it is revealed was absent as her former boyfriends and brother sexually abused Jackie when she was younger.   Despite Jackie’s best attempts to acclimate to life with her son by doing things like enrolling him in school while still making time to train, her mother takes custody of him after Jackie unknowingly yells at him as she’s having a panic attack.

On the MMA side, “Immaculate” sends Jackie to work with the prototypical zen master head coach Bobbi Buddhakan Berroa (Sheila Atim) to prepare for her bout with Lady Killer (Shevchenko).  Her assistant coach Pops (Stephen McKinley Henderson) takes a backseat and is more of an observer rather than a voice in her camp.  It should be noted, while it is clear that being a fighter is Jackie’s profession, there is only a single MMA bout of any kind and Shevchenko’s character does not appear until the film’s final act.

While the film does its best not to fall into familiar tropes, it harms itself by attempting to avoid them.  At her lowest point leading up to the seminal fight, Jackie and Bobbi partake in a throng of passion only for Bobbi to abandon Jackie the night before the fight in sequences that play out just minutes apart from each other.  Bobbi never makes a dramatic return as Jackie is in the crucible of battle.  Instead, the final fight ends with the previously forgotten Pops being the one in the heartfelt embrace between fighter and coach.

The highly promoted fight between Berry’s character and Shevchenko falls in-between the many realistic takes of mixed martial arts played out on-screen. The flashier moves seen from the likes Michel Pereira and Cory Sandhagen are nowhere to be found.  Instead, Berry and the stunt team performed a resilient battle against Lady Killer that sees several submission attempts across the fictionalized five round contest.

The film’s finale plays out awkwardly.  After rallying back to seemingly defeat Shevchenko (at least on this writer’s scorecard), Jackie loses the decision and instead takes home the moral victory and is celebrated as the people’s champion for her resiliency both in the bout and for all she’d been through.  Bobbi returns, bruised and with a broken arm that is never explained (as is what happened with Manny’s father) and the two reconcile with Bobbi’s explanation being that she wanted to prove to Jackie that Jackie didn’t need her to win the fight.  In the end, Jackie reunites with Manny who finally speaks for the first time as it is implied the two embark on their lives together as mother and son.

BRUISED is now on Netflix 🥊 pic.twitter.com/SQ0HUWPKRF

The film certainly provides real world references and homages to real MMA world (in the women’s game in particular) but it can be argued that they are more distracting if you are actually are a follower of mixed martial arts.  It’s all too noticeable seeing a slithering promoter run Invicta on-screen if you are at all familiar with his completely pleasant real-life counterpart Shannon Knapp.  Another, during a heated and exchange with her manager, Berry’s character is asked if something was necessary to which she passionately responds “It was SUPER Necessary!” in a moment that is meant to be serous but can only be seen as comical if you’ve listened to Jorge Masvidal over the past two years. 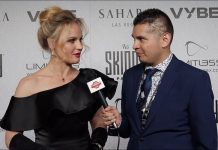