Borg (14-5), a former UFC flyweight title challenger who has had to overcome a seemingly endless set of hurdles in his fighting career, announced Tuesday that he had contracted COVID-19. That means Borg won’t be making the trip to Abu Dhabi; instead, EFC champ Sylvester Chipfumbu (7-3) will step in on short notice against de Oliveira (16-2).

Taking to social media, Borg wrote that “My heart breaks to have to post this but unfortunately I have tested positive for Covid 19 and will not be able to compete at UAE Warriors 24. I have learned that although Covid varies from person to person, it is definitely not something to take lightly.”

The former UFC talent went on to say that “I have been extremely sick the last week and have not even been able to get out of my own bed. On top of having every symptom there is for Covid, the duration has lasted longer than usual. I am very upset that I will not have the opportunity to compete for such an amazing organization and send my sincere apologies to everyone who supported me this camp.”

Borg’s string of bad luck is well-known to fight fans. His title fight with Demetrious Johnson, originally scheduled for UFC 215, was pushed back a month when he fell ill the day before weigh-ins. Borg was also present during the infamous Conor McGregor bus attack ahead of UFC 223 in 2018, and was forced off the card after being injured by shattered glass during the incident.

His bout with Brandon Moreno was then rebooked a couple of months out, only for Borg to withdraw to care for his infant son, who had been born with hydrocephalus and had recently undergone brain surgery.

In Borg’s place later this month will be Chipfumbu, who has won his last two fights. He claimed the EFC bantamweight title back in May, winning a unanimous decision against Faeez Jacobs. Brazil’s de Oliveira currently sits on a five-fight win streak. He captured the UAE Warriors 135lb title in his last outing. 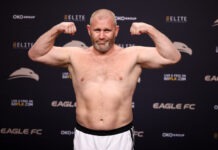 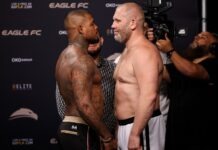