Just a week removed from her win over Silvana Gomez Juarez, Lupita Godinez will step inside the UFC octagon once again.

Making an incredibly quick turnaround, “Loopy” Godinez (6-1) will fight just seven days after her first UFC win, stepping in for Sijara Eubanks against Luana Carolina (7-2) at UFC Vegas 40. In the process, Godinez will move up a weight class, with the fight this Saturday coming at flyweight.

The short-notice opportunity comes as Eubanks was forced out of the card due to COVID-19 protocols. With no suspension handed to Godinez following her win this past weekend, the stage was set for her to swoop in on short notice.

Word of Godinez taking the fight was first reported by ESPN Deportes. Cageside Press confirmed the news with a source close to the situation.

“Loopy” is no stranger to short notice fights. The Mexican strawweight, who lives and trains in British Columbia, Canada, entered the promotion as a short notice replacement against Jessica Penne this past April. After a fight with Sarah Alpar the following month fell through due to visa issues for Godinez, she was booked opposite Sam Hughes at UFC Vegas 39. Hughes was then forced out of that fight due to COVID-19 protocols, replaced by Juarez. Godinez earned a submission victory and claimed one of the event’s Performance of the Night bonuses in the process.

Luana Carolina sits at 2-1 in the promotion currently. She’ll enter this weekend’s fight off a win over Poliana Botelho.

UFC Vegas 40 takes place Saturday, October 16 at the Apex in Las Vegas. The card is headlined by a women’s featherweight fight between Aspen Ladd and Norma Dumont.

The full UFC Vegas 40 card as it currently stands can be found below: 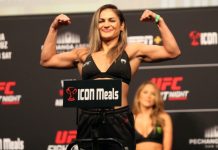 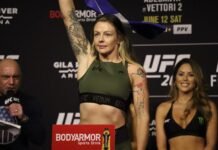