The UFC returned to the Apex this past Saturday after a successful International Fight Week and fun UFC 266. We had some Brazilian on Brazilian violence in the main event; well, it was supposed to be violent. An unfortunate clash of heads ruined the co-main event, and some UFC veterans got back into the win column. However, what about the losers of UFC Vegas 37? Keep on reading while we play matchmaker.

Johnny Walker was unsuccessful in his first UFC main event as he lost an uneventful unanimous decision. After starting his UFC career out with three first-round knockouts and three Performance of the Night bonuses, he is 1-3 in his last four. Walker came into the fight ranked No. 10 in the light heavyweight division, so he might fall a couple of slots come Tuesday.

For his next outing, he should fight the winner of Jimmy Crute vs. Jamahal Hill, which takes place in December. Walker and Crute were scheduled to fight previously, but Walker had to pull out.

This match-up is relatively easy. Kevin Holland and Kyle Daukaus should rematch later this year or early next year. Holland seems to want to run it back very quickly, while Daukaus wants it after his brother’s fight in December.

The fight on Saturday was ruled a no contest due to an accidental head clash, which led Holland to be flash knocked out and then end up submitted. It was an extraordinary set of events, but we finally got to see the use of instant replay in a fight.

Alex Oliveira dropped his third fight in a row to Niko Price at UFC Vegas 38. This is his second time hitting the dreaded three-fight skid. While for most fighters on the roster, their time in the UFC would come to an end, “Cowboy” will probably get another fight. The Brazilian should fight another Brazilan on a losing streak, setting up a loser gets cut match-up. Dhiego Lima, who is coming off a knockout loss to Matt Brown, should fight Oliveira

Krzysztof Jotko spoiled the middleweight debut of Misha Cirkunov at UFC Vegas 38 as he lost a split decision. Cirkunov saw the third round for the first time since 2016, but he is also a two-fight skid. The Latvian-Canadian could go back up to light heavyweight, but I think he looked okay at middleweight. Makhmud Muradov, who just had his 14-fight winning streak snapped, would be a good fight for both men. For Muradov, it is a bounce-back fight, and for Cirkunov, it is a chance to let the UFC know he can still be elite.

It was a tough night at the office for Mike Breeden, who was knocked out in under two minutes in his UFC debut. However, he still gets massive respect for stepping up on short notice to face Alexander Hernandez. The loss snapped Breeden’s two-fight winning streak. Luigi Vendramini, who Paddy Pimblett knocked out, should be on Breeden’s radar next. 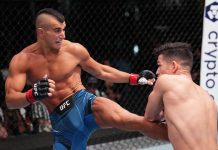 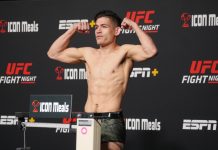 UFC Vegas 53: Mike Breeden Reveals He Had Emergency Surgery Weeks Out From DWCS