As much as The Ultimate Fighter is a little long in the tooth even after a multi-year hiatus, there’s nothing quite like the reality fighting show build a rivalry so intense you are left counting down the days until fight night. This year’s TUF 29 brought out a rivalry between Alexander Volkanovski and Brian Ortega that was both unexpected, and had us salivating for their anticipated fight inside the jam-packed T-Mobile Arena at UFC 266.

Brian Ortega wanted to step inside the Octagon as a contender for the featherweight belt with hopes of capturing the title that eluded him at UFC 231 against Max Holloway. Ortega is ever-evolving, and bounced back in fantastic fashion against The Korean Zombie to earn a coaching spot and the next shot at Volkanovski’s title.

Alexander Volkanovski is well on his way to showing that he has the potential to become the greatest featherweight champion of all time. With his wins over the division’s long time greats Jose Aldo and Max Holloway, adding a victory against the dangerous Brian Ortega could rightfully contribute to that debate of just who the 145lb GOAT was.

Alexander Volkanovski vs. Brian Ortega turned out to be a back-and-forth fight with near finishes from both men. There was no doubt that as the final bell sounded in this five-round war that the main event was an easy choice for “Fight of the Night” honours. The unanimous decision victory went to Volkanovski, who retained his title and looked strong doing so.

The pros reacted in spades to the intense UFC 266 main event between Alexander Volkanovski and Brian Ortega. Check that out below!

Volkanovski x Ortega was a WAR!

These guys delivered "a great show."#UFC266

Holy shit! What an incredible fight. So impressed by @BrianTcity and the heart he showed. Of course the night belonged to @alexvolkanovski He truly is the champion of the world, but both men should take a bow! Congrats fellas!!! Inspired

Great performance by the champ @alexvolkanovski

Amazing fight! Hats off to both gentlemen. 👏 #UFC266

He might not be leaving with the belt but Ortega showed a champions heart tonight. Congratulations to both guys on a great fight!

When underdogs almost win people go crazy. The people love to see it but the champ is ferocious. Great fight. 🔥🔥

That kind of stuff is what inspires other fighters. Hell of heart from the champ battling through those subs

Wow, this fight is wild. Volk is tough for getting out of those chokes #UFC266

Not a bad fight. Congrats shartsy 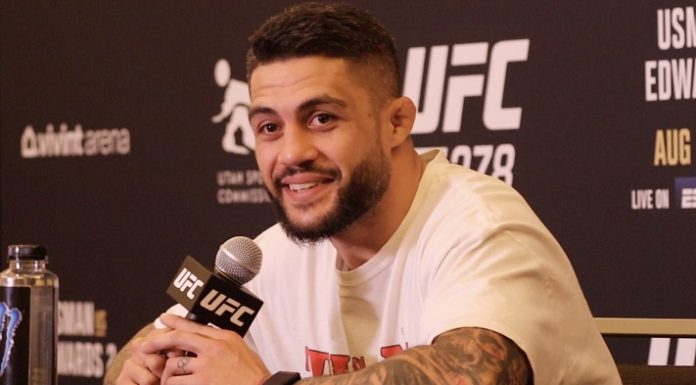