While she couldn’t put Roxanne Modafferi away, Santos (18-1) was dominant in the fight, and earned her third straight win inside the octagon.

It was something of a surprise to see Santos go to the ground early and often with Modafferi, given “The Happy Warrior” is always comfortable fighting off her back. Especially since Santos was finding so much success on the feet.

“I’m getting better everywhere,” including with her hands, Santos noted, “but I love the ground game. And I knew I was able to do it, so it was part of my plan.”

With three straight wins over Molly McCann, Gillian Robertson, and now Modafferi, Santos is on an upward trajectory. A bigger name could be next, and Santos appears ready for anything.

“I’m always getting better. I’m going to be ready to fight all the best fighters,” she stated on that subject. “I’m looking to the top, but whoever steps up, I’m going to fight.”

Of late, Santos has been training with Marina Rodriguez, an experience she called “amazing,” adding that “she’s an unbelievable fighter, and she’s a very nice person. So I’m loving the training.”

She’s also a very different fighter in 2021 than she was in her promotional debut back in 2019. That’s something Santos credits to losing that fight, against Mara Romero Borella.

The lesson learned, she said, “is focus. I did not have focus for that fight, and after that, every single fight, I keep my focus on the right girl.”

Watch the full UFC 266 post-fight press scrum with Taila Santos above. More coverage of the event can be found below. 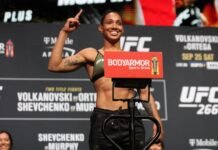