UFC 266 is down a fight thanks to positive COVID-19 tests from flyweight Manon Fiorot and her team.

Fiorot had been expected to face Mayra Bueno Silva at the event this Saturday. However, per a report by ESPN Deportes, both fighters will be pulled from the card, with the bout pushed back to a later date.

The French fighter, reportedly asymptomatic, and a member of her camp both tested positive for the disease.

Silva (7-1-1) most recently fought to a draw with Montana De La Rosa back in February. Prior to that, she had collected her second win inside the octagon against Mara Romero Borella. Overall, the Brazilian is 2-1-1 in the promotion, after starting her career undefeated.

Her only loss came to Maryna Moroz last year.

Fiorot (7-1) has won seven straight fights since losing her debut against Leah McCourt. She’s 2-0 in the Ultimate Fighting Championship to date.

Per an additional report by MMA Junkie, it appears Fiorot vs. Silva will land on the promotion’s October 16 event, which just recently lost Miesha Tate vs. Ketlen Viera, its planned main event. That was also due to a positive COVID-19 test, on the part of Tate. 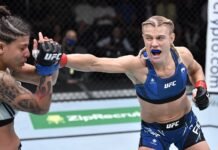