Combate Global’s show on Friday flew under the radar, but history was made on the card.

A 38-year-old former member of the U.S. Army Special Forces who began transitioning (male to female) in 2010, Alana McLaughlin made her MMA debut Friday night against Celine Provost at Combate Global’s latest event. As a transgender athlete in mixed martial arts, McLaughlin is a rare case. McLaughlin said prior to the bout that she was attempting to pick up the mantle that Fallon Fox put down.

Fox, of course, was the first transgender MMA fighter to fight in MMA, back from 2012 to 2014. He presence in the sport drew loads of controversy from notable MMA figures such as Joe Rogan and others, especially after she fractured the orbital bone and concussed her final opponent, Tamikka Brents. Fox was also in person for McLaughlin’s debut Friday night.

The first round was a rough one for McLaughlin, as Provost rocked her multiple times and seemed on the verge of getting a finish. However, McLaughlin would survive and in round two would secure an amazing comeback finish, as she would take down Provost and get the rear-naked-choke finish at 3:32 of the second frame. That moved McLaughlin to 1-0 in her MMA career.

The win was a historic one, given there has been no known transgender fighter since Fox in 2014 in MMA. However in boxing, Patricio Manuel became the first transgender male to compete in a professional bout in the United States when he beat Hugo Aguilar via unanimous decision.

McLaughlin made it known that she’s trying to open more doors for trans athletes to compete, saying:

It’s worth noting that McLaughlin’s debut comes at a time as multiple states argue bills aimed at restricting transgender athletes from participating in youth, high school and college sports. Earlier this summer, Mississippi became the second U.S. state to ban trans athletes from competing in women’s sports. The Mississippi Fairness Act requires athletes to compete according to their sex at birth, rather than gender identity. More states are expected to follow suit. 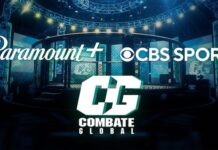