Triller Fight Club is putting its money where its mouth is.

After former UFC light heavyweight champion Vitor Belfort made short work of former heavyweight boxing champ Evander Holyfield in the main event of Triller’s Legends II card on Saturday, Belfort took to the mic, calling out social media celebrity Jake Paul. He then dropped a bombshell: $25 million dollars was up for grabs.

Triller Fight Club execs including Ryan Kavanaugh then sweetened the deal: $30 million, winner takes all, in Belfort vs. Paul. On Thanksgiving.

The question is, of course, whether Paul will take the fight. And if he can. The former Disney star is currently with Showtime, who were behind his recent fight against another ex-UFC champ, Tyron Woodley. Paul won the fight via decision, but was rocked and truly hurt for the first time in his boxing career. After the fact, he alluded to taking some time off.

It’s unclear what the terms of Paul’s deal with Showtime, including length and number of fights, actually are.

Belfort did what he had to do Saturday against a 58-year old Holyfield in a fight no one really needed to see. He dropped the ex-champ with an uppercut early. A second barrage of punches caused the ref to wave off the bout with Holyfield still on his feet. But no one besides Holyfield himself could fault the man for calling it a night. It simply saved Holyfield from taking further damage — the outcome of the fight was clear almost from the opening bell.

Belfort was quick to call out pretty much any boxer willing to fight him post-fight, including Canelo Alvarez. Of course, originally planned opponent Oscar De La Hoya, who withdrew due to COVID-19, could still be a possibility. But not surprisingly, Paul was the main focus. The Youtuber has made a career out of fighting past-their-prime former athletes, including NBA star Nate Robinson, former Bellator and ONE Championship title holder Ben Askren, and most recently Woodley.

Two things differ in the Belfort instance, however: Vitor has legitmate striking prowess, and he’s much closer to Paul in weight than either Askren or Woodley.

While calling out Paul, Belfort was clearly fired up. And he was sure to add in a dig against the controversial celebrity. In addition to claiming Paul was “running” and proclaiming him a “little b*tch,” the Brazilian added “I’ve got family! American needs me, not you!” 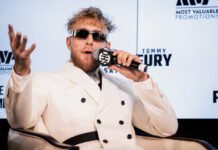